Posted on February 16, 2016 by thecricketcouch 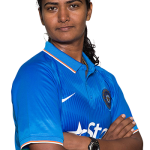 In this episode, Shikha Pandey, India women’s national team’s allrounder talks about her cricket journey through her college education, serving in the Indian Air Force, being part of a team that defeated England in England – on her debut, no less, the T20I series win in Australia recently, Women’s Big Bash League, and the upcoming World T20, amongst other things.