Couch Talk 169 with Sam Collins and Jarrod Kimber. “Death of a Gentleman”

Posted on August 10, 2015 by thecricketcouch 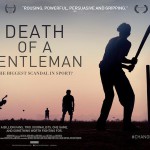 Cricket journalists Sam Collins and Jarrod Kimber embarked on a journey in 2011 to make a cricket film about Test cricket. It ended up being a documentary about cricket governance, misadministration, shady deals and the takeover of the game by India, England and Australia. They talk about the film, the four year journey to make it, the various hoops they had to jump through and their hopes for the fim, amongst other things.