Posted on July 1, 2015 by thecricketcouch

—
I’m at the waiting lounge to board the flight to London Heathrow. Since I booked this trip on United using my frequent flier miles accumulated through the world trip that Kathleen and I had been, United is making my fly via Chicago from Philadelphia, their main hub.

This is Day 1 of the 58 day trip covering the Ashes series of 2015 in England and Wales. With the traveling bug still very much intact, I booked the tickets for this trip soon after we returned from the world trip. Since I had never watched a 5-Tests series live before, I had thought this would be a terrific opportunity to accomplish that.

When I booked the flights in April, I was unemployed and still pondering about writing -on cricket mostly – as a full time profession. However, as the initial buzz of spending 9 months on the road wore off, my ambitions became a bit more realistic, that, I am more comfortable having a full-time job with cricket freelancing (Podcast/Writing) on the side. I am too apprehensive that if I focused entirely on cricket 24×7, I’d get too cynical and dislike it.

A week or two after I booked the flights, an engineering company I had worked with before came calling and said were interested in hiring me. Without really meaning to, I sort of pulled a George Costanza interviewing with the New York Yankees routine. In fact, I asked the person who informally chatted/interviewed me where they see me in their company in 5 years time. I also told them that I have a two month trip to England already booked and so they gave me the option of working as a “temp” in June and start as a full time employee on September 1. Sometimes, things do fall in to your lap.

In the meantime, as the cricket world seemed to march on without missing a beat, I was starting to get uninterested and getting bored by the sheer deluge of cricket so soon after a World Cup. I deactivated all my social media accounts to check myself in to Twitter Detox so that I could turn cricket off for a while. Even though I watched a bit of cricket, mostly the Tests from West Indies, I wasn’t so keen. There were thoughts in my head to shut down this website and discontinue Couch Talk podcast.

When I gave myself the time to switch off from cricket, I realized the probable reason why I felt the growing separation from the sport. For the past 12-13 years, every summer I played competitive cricket and 2015 summer is the first time I hadn’t had any active cricket. The more I play, the more I understand the struggles and the more I appreciated the sport for the infinite possibilities it always seemed to cradle in its bosom.

One of my fond memories from the world trip was taking part in net sessions in Barbados, Manchester, Sydney, Townsville and in Melbourne and playing Gully cricket matches in India and Sri Lanka. To go from such surfeit of cricket, loaded in to 9 months, to cricket (playing) vacuum back in the US, sort of through me off kilter.

So, this Ashes, not only am I interested to see 5 Tests back-to-back, but also find the answer to the question: Does cricket still matter to me? 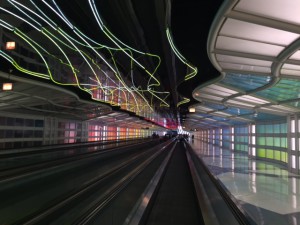 Lights on the way to Terminal 1 at O’Hare

Tweet
This entry was posted in Ashes 2015 Diary and tagged Ashes 2015. Bookmark the permalink.