Posted on April 9, 2015 by thecricketcouch 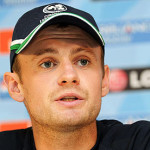 The captain of Ireland, William Porterfield, discusses his team’s performance in the recently concluded CWC 2015, the ICC’s decision to limit number of teams in the 2019 world cup to 10, impact of Phil Simmons as coach, and the influence of a golden generation of Irish cricketers on their grassroots cricket amongst other things.