Posted on February 19, 2015 by thecricketcouch 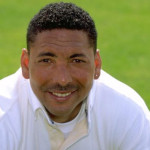 Former England all rounder Phil Defreitas takes about his memorable debut in the 1986-87 Ashes, playing alongside Ian Botham, England’s losses in the 1987 and 1992 World Cup finals and also about England’s prospects in the 2015 World Cup.