Posted on December 27, 2014 by thecricketcouch

On a festive Boxing Day at St. George’s Park in Port Elizabeth, a day of the historic debut of Temba Bavuma as the first black South African batsman to play Tests, West Indies also had their own debutant getting a taste of Test cricket in Keon Kenroy Peters. At the wrong side of 32, this experienced but limited seamer from St. Vincent may not play many more Tests but made it memorable for himself by pricing out the wicket of Dean Elgar.

Much in the mold of the West Indian seamer of the past Ian Bradshaw, a left armer not really blessed with the gift of speed but plenty of nous and self belief, Peters stuck to the discipline that had made him the highest wicket taker in the West Indies regional 4-day competition in 2013. Six maidens in his three spells of 5 overs each, giving away 44 runs pointed to his strong fundamentals that compensate for the obvious lack of pace. One former South African pacer noted that Peters’ 128 kmph was “high school pace” but not many high school pacers could dislodge an opening batsman well set on 121, just with nagging length and fine movement off the seam. 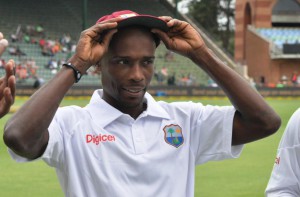 For someone to hold out hope even after 14 seasons and 62 first class games that they will one day play Test cricket is sure sign of self-belief, and Peters has oodles of it. When similar bowlers to him may have resigned themselves to be just Number 3 or 4 seamer in the side, he wasn’t the least surprised that he was handed the new ball on debut, with young guns like Shannon Gabriel and Jason Holder capable of firing in the mid 140ks. “I always believe that once I step on [to] the field, I am number one. That’s my self-belief. When you are on the field, it’s just you and the ball and not who is number one or number two”, he said.

Peters displayed the thinking that is to be expected of someone with his level of experience at First Class. He began his first spell, even with a “mixture of emotions” occupying his mind on the occasion of his long overdue debut, assessing the conditions and the opposition, and identifying areas he could and should bowl in. He understood that the South African batsmen brought up on the bouncier tracks tend to stay on the back-foot a lot more and so, he should be bowling a fuller length. He opened his second spell with a couple of maidens, and in the third spell, 73rd delivery of his Test career, he winkled Elgar out.

Not too along ago, Pankaj Singh from India made his debut against England but had to wait a very long while to get his maiden wicket, so much so it started a Twitter hashtag. Earlier on this Boxing Day, Sri Lankan spinner Kaushal had to endure quite a bit of stick from Brendon McCullum to buy his first Test wicket. It wasn’t surprising that the first wicket was on Peters’ mind as well, just to get the proverbial monkey off his back. He said, “my sole ambition and my first aim was to get a wicket”, which he dedicated to his seven-week old son Ethan.

Peters may not play another Test for West Indies. He may not take another Test wicket. But, no one can take away the recognition that has come to him. That today, he is a Test cricketer, and a happy father.