Posted on November 7, 2014 by thecricketcouch 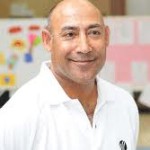 Former Pakistani opener Mudassar Nazar talks about his baptism by the fire of Lillee and Thomson, taking up after his father Nazar Mohammad, his playing career, his admiration for Sunil Gavaskar as a batsman, the greatest Pakistani team, how he handled the big name Pakistani players as their coach and his role with ICC”s Global Cricket Academy in Dubai.