Posted on October 21, 2014 by thecricketcouch 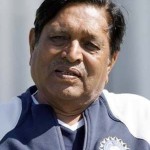 Former Indian batsman Chandu Borde talks about his playing career, his idol Vijay Hazare, facing up to the West Indian quick bowlers, meeting Sir Donald Bradman, his tenure as the chairman of Indian selectors, the story behind the selection of Mohammed Azharuddin in the home series vs. England, his relationship with Sachin Tendulkar, and his role in the Indian series win in 2007 in England amongst other things.