Posted on August 14, 2014 by thecricketcouch

In the Caribbean, if you trip and fall, chances are that you will land on something or someone historic. That’s even more so when it comes to cricket.

The Caribbean is one of the last places in the cricketing world where legends and landscapes still remind us of the days when cricket was still just a sport. The cricketing heroes are approachable, do not deal in corporate speak and are treated just like any other person, and they in turn, more importantly, treat the fans as human beings who care about a silly game of bat and ball.

During one of the CPL games we attended, I had the rare chance of being just two feet away from the great Sir Gary Sobers. He was waiting for the match to end to go on the field and hand out some awards. As the final couple of overs dragged on, he stood there patiently with his handlers, while fans sidled up very quickly trying to take pictures and say a polite appreciative word or two to him. He acknowledged the adulations and was more than happy to pose for pictures, and even indulged in a bit of banter. The greatest cricketer of them all being so friendly and even in his advancing years being competitive in the arena of verbal jousting, was a sight to behold. 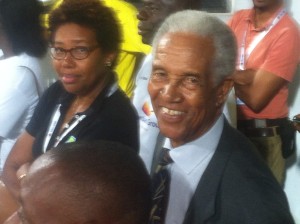 When Sir Gary was a young boy of 12, the prevalent conditions in Barbados were such that he couldn’t play with the members of the oldest cricket club in the land, Wanderers Cricket Club, because it had a “whites only” policy. Sir Gary’s legend was already growing in the island and Denis Atkinson, who was the captain of the club, and white, tried his best to get young Sobers in but couldn’t and settled for turning up an hour early at the nets and have Sobers bowl to him, with the offer that if he could knock off the shilling placed on the stumps, it was his. It was a bit of justice that when Sobers debuted for West Indies as a 17 year old, Atkinson was still playing for West Indies in the middle order stacked with the 3 W’s – Walcott, Weekes and Worrell.

The 3 W’s is such a revered moniker in the cricketing world and especially in Barbados. Sir Frank stares back at you from the $5 bill. The roundabouts in Barbados are named after their famous cricketing sons. The giant spaceship of a stand at the Kensington Oval bears the names of the 3 W’s. The cricket ground on the campus of University of West Indies is called the 3W’s Oval. This ground was built in preparation for the 2007 World Cup held in the West Indies and has served as a venue for warm up games. On one side of the playing area, to the left of the pavilion is the final resting place of Sir Frank and Sir Clyde and apparently, Sir Everton has chosen a spot for himself not too far from his good mates, for when the time comes. 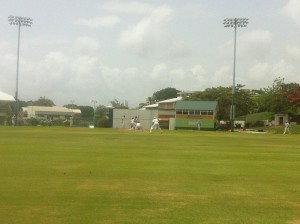 I went to the W’s oval to watch a first division match played between Wanderers CC and University of WI. Currently, three Wanderers CC members play Tests for WI: Jason Holder, Kirk Edwards and Kragg Brathwaite who was the club captain on the day. They play 3-day matches that are spread over 2 weekends – Saturday and Sunday of the first week, and Saturday of the following week, with a minimum of 75 overs per day. I walked in on the 3rd day of the match and Wanderers had an impressive 1st innings lead, and Brathwaite fell few runs short of his 2nd century of the game while pushing for quick runs. UWI were in trouble early in the 4th innings but were led to safety by their skipper and former WI player Floyd Reifer with an unbeaten 100.

A couple of days later, we went on a tour of the “Cricket Legends of Barbados” museum.  It’s a stone’s throw from the Kensington Oval. There were no visitors except for us and the entry fee was $10. We were told somebody would guide us through it and were initially left on our own. I strongly suggest anyone visiting Barbados to visit the museum. It was an excellent educational and entertaining experience for Kathleen to learn about the legends of the game, of what they meant to Barbados and West Indies cricket, and what they represented to the fan in me. 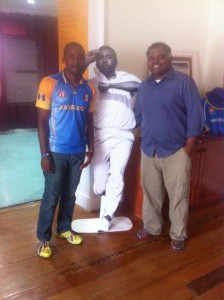 With Father and Son Marshalls

After 20 minutes or so, a short young man of slight build took us on the guided tour. He apologized for being a bit tardy as he said he was being swamped with the work from CPL. He reminded me of a former cricketer and had seen him during the game we saw the 3 W’s oval; he was the 12th man. So I collected my courage and decided to trust my memory and asked, “Aren’t you Mali, son of Malcolm Marshall?” He proudly responded, “Yes”. Like his father, he is a fast bowler and number 7 batsman. It’s a bit surreal to be led on a tour of Bajan Legends, of which Malcolm Marshall was unquestionably one, by his own son! We later took a picture with Mali, next to a cut out of his father.

At the 3 W’s oval, we chatted up the coach of Wanderers CC, Ricky Clarke, a former fast bowler from Barbados who played in the central Lancashire leagues, and gently requested whether I could turn up for nets and have a bowl. He enthusiastically agreed to have me over the following Tuesday.

As luck would have it, we had booked our flight out of Barbados to London for the Monday and completely forgot about it, and missed the flight. Thanks to the kind travel agent, we saved rest of the itinerary but put a hole in our reserves by booking two one-way tickets to London but I got the opportunity to bowl at the famed Wanderers nets. 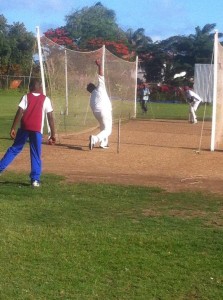 Bowling in the Wanderers CC nets

As far as cricket fields go, it was quite ordinary with uneven outfield. Coach Ricky put my name on the roster of net bowlers (Yes!) and threw me couple of cricket balls that looked to be at least 40 overs old. After bowling for about 30 sweat soaked minutes, I had my heart full and thanked the coach on my way out. As we were just about to leave, we ran in to former WI bowler Ian Bradshaw on the outfield, who was coming in for training.  I introduced myself and asked him whether he’d be on the Couch Talk podcast, and he happily gave me his number and told me to call him whenever. Former international cricketer without any airs about him and treating you like he would like to be treated – That is so Caribbean!