Posted on August 1, 2014 by thecricketcouch

Human nature is such that we always look for things we are familiar with when we are in unfamiliar surroundings. So it was that on our first day in Barbados, on our way to watch a CPL match, we saw a roadside “Trini Doubles Stand”. As we had made Doubles a big part of our daily diet at Trinidad, our minds and our taste buds made note of its location – 20 minute walk from where we were staying. 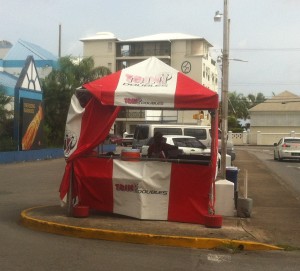 Fish cakes are to Barbados what Doubles are to Trinidad: Affordable snack food that is almost ubiquitous. We had our first taste of fish cakes while at a CPL match at the Kensington Oval. Deep fried batters containing some fish pieces sold in a little paper bag (containing 7) for the price of five Barbados dollars (US $2.50). They are excellent snacks to go along with a bottle of beer or a drink of rum. They are also served in restaurants in baskets with a dipping sauce called “Sauce Marie Rose” which is essentially mayonnaise and ketch up whisked together with some lemon juice and pepper sauce. 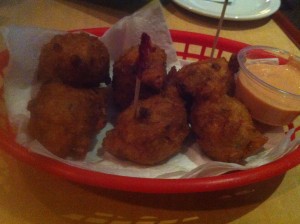 Fish cakes served with sauce marie rose in a restaurant

Trinidad, through its incredible mixture of cultures, has a wide range of affordable on-the-go food. In Barbados, most of the food contains fish, and if you find yourself there you have to try the outdoor fish fry shacks located in the south of the Island at a small fishing town called Oistins.

Approaching Oistins on a friday night, you are greeted by the low thump of drums and the fragrant smoke of a dozen different stalls grilling up the day’s catch. Originally created by the locals as a way to escape the throngs of tourists, it has since been discovered for the “must do” attraction it is, and expanded to hold both. It now boasts a maze-like series of covered seating areas around small outdoor kitchens, open dance areas, multiple stages, tables selling jewelry and small knick-knacks, and an area to play dominos. 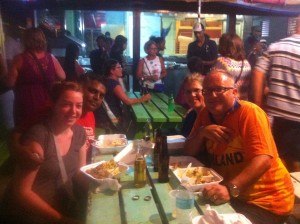 At Oistins with our hosts, David and Christine

Our ever-gracious hosts, David and Christine, frequent a spot within the colorful chaos known as Uncle George’s, where we sat at picnic tables (wherever you can fit is where you go) and ordered beer and food. The food was a choice of different fish–salmon, marlin (called “dolphin”), flying fish, and shrimp, with side choices of a baked potato or “macaroni pie.”

We ordered the salmon and flying fish with a side of each, but it turned out the macaroni pie was out and we both got baked potatoes. This was no problem, as the potatoes were delicious, and this style of “you get what we have” seemed to be fairly common throughout Barbados. Our food came in about 45 minutes, which gave us plenty of time to drink Bank’s beer and Twist Shandy respectively while exploring the bands and dominoes. 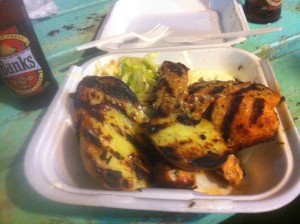 Grilled salmon and potatoes served in a styrofoam box, and a beer to wash ’em down with,

Flying fish is one of the more common seafood options in Barbados, and is popular enough to even make an appearance on the dollar coin. It is one of the more sustainable food options, as the fish have a short life span and reproduce easily. Rest assured, the wings are removed before serving.

We ended the evening by strolling around again through the festive environs, taking in the mix of locals slamming dominoes on the table and dancing to the beat and the tourists having their portraits drawn by street artists and comparing shell bracelets at the stalls. An interesting thing we noticed was that a person would quickly come by our table as soon as we finished our beers to take the bottles away. We learned later that these are people who sell the bottles back to the manufacturers for a small fee, and make their living doing it. Recycling at its most efficient!

The place is open throughout the week, but apparently Friday is the day to go if you want to experience the full party atmosphere. It was a unique experience, and definitely worth exploring. In the end, the food was just a small (but delicious) part of the whole event. 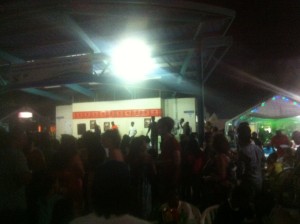 Ositins is the place to be on a Friday night, for food, drinks, music, dance and party!

Most of the places to eat out in Barbados are located on the south coast going away from Bridgetown towards Christ church and further South and West. Unsurprisingly, these are also dotted by the most beautiful pearly white sandy beaches lashed by the deepest shade of blue waters you will ever see. Most of the places are expensive if you are on a tight budget and seem to cater almost exclusively to tourists.

There are plenty of restaurants that would give these tourists – mostly from U.S. and U.K. – a feel of pubs back in their homelands, with sports on television, and sport equipment and jerseys adorning the walls, ceilings and strategically placed showcases. Kathleen calls them “Chili’s with a bit more atmosphere”. A meal of burger with fries, appetizer and a drink would cost a few dollars more than it would have at Chili’s back in the U.S. but that’s the price you pay for the proximity to the beach I guess.

There are little strip malls of food joints all along the ‘Coast Road’ that provide various options for your appetite and moods: From pizza to falafel wraps, from Chinese take outs to Roti places.

Towards the end of our trip, we were introduced by our hosts to Fish & Cheese (and egg when available) cutter sandwiches. Kathleen has already written about them. Take a look by clicking here.

On our last day in Barbados, we decided to bookend the trip to the Caribbean by having Doubles for lunch. This would be the last time we will have them on this trip, so it only seemed appropriate.