In the last two years, we have been to Trinidad (3 times), Antigua, Jamaica (twice) but the early impressions of Barbados is that it is unlike any of the Caribbean nation we have been to. It almost has an upscale suburbia feel to it when compared to rest of the Caribbean. The beaches are better, the water is a deeper blue, the highways are wider and traffic is a little less congested. Based on the conversations we have had with people that have lived here for a while, Barbados relies more on tourism than the other larger islands which have a bit of industrialized economy to lean on, and that’s perhaps the reason Barbados has that sleepy feel to it.

Jamaica has jerk chicken as its specialty food, and Trinidad’s eclectic cultural background produces a vast range of cuisine choices but so far, we haven’t come across much variety in Bajan street food. There are fish cakes which are deep fried batter containing salt fish similar in looks to Aloo Bonda but that’s pretty much it. Perhaps in Bridgetown or some other part of the island it will be different. We will cover the Bajan food options, as limited as they seem to be, in a separate post.

We are staying at a British couple’s residence and the story of how we came to do that is an interesting one. A few months ago, I noticed that some of the Couch Talk episodes were being linked to a blog originating in Barbados. It belonged to that of the former England cricketer Roland Butcher. He is currently the Head Coach at the Academy of Sport, University of West Indies (Cavehill). Intrigued, I sent an email to him and promptly received a response, in which another gentleman named David Oram was addressed too. David has been helping Roland in curating that blog in an attempt “to fill the large gap in writing, coverage etc. of West Indies cricket” on the Internet. We got conversing over emails and came to know that he is a big supporter of Couch Talk and he provided plenty of guest ideas, including that of umpire John Holder and Roland himself. 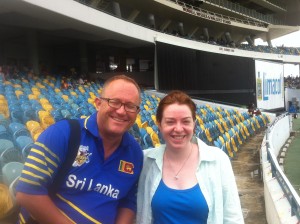 Our gracious host David Oram with Kathleen at a CPL match

David, a self-proclaimed cricket anorak, is a member of the MCC, and an Essex fan from Walthamstow in north east of London. He’s been living in Barbados for 3 years as he and his wife Christine are associated with the British High Commission here.

During our world trip planning last year, we included Barbados since we had never been here before and sort of knew there would be some cricket played here. That plus the rich and vast history made it a perfect trip destination as we seek to get Kathleen introduced to (and hopefully immersed in) cricket. Little did we know that cricket would also allow us to hook up with a gracious couple who would open their doors for us.

Barbados is only a short flight away from Trinidad – about 50 minutes – and the first thing you register is how fast the immigration line moves. On average, it has taken us anywhere from 30 to 60 minutes to clear immigration in Trinidad and Jamaica during our previous trips but here, it took less than 10. Great start! 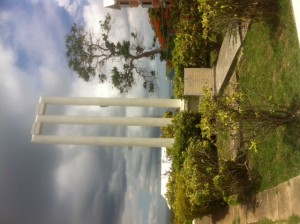 David, once we confirmed our itinerary, helped map out some of the things to do while we are here – cricketing things, of course. He had tickets ready for the Barbados Tridents matches in the Caribbean Premier League, and took us to the Academy of Sport where we met Roland, Graeme West (Head coach of the High Performance center team) and Dr. Rudy Alleyene (Academic Coordinator who did his Ph.D. from Temple University in Philadelphia on sports psychology). Roland led us on a tour of the facilities there – I’ll do a separate piece on it – but I have to mention it here that we got to pay our respects to two of the 3W’s – Sir Frank Worrell and Sir Clyde Walcott – and also saw the spot Sir Everton Weekes has chosen to be his final resting place, not too far from his celebrated mates.

It was an interesting experience at the Kensington Oval for the Barbados v St. Lucia CPL T20 match. Typically in the Caribbean, the majority of the people in the stands are of African descent. In Trinidad’s case, you of course see some of Indian descent as well but generally, it can be termed as “non-white”. Here, at the cricket, there was a sizable chunk of “whites”, mostly people from England either on holidays or who live and work here. I met a gentleman who came to Barbados as a teenager from England and has just stayed here for 40 some years and another from Wales, who came here to teach but ended up opening a surf shop and lived here for 35 years. I was told that at any given time, there could anywhere from 8000 to 15000 Brits on the island. Considering the population is less than 300,000, that’s a pretty big number! 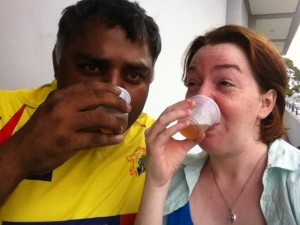 Another interesting thing at the CPL match: El Dorado Rum, which is one of the lead sponsors of CPL offer free samples of their Rum as you walk in to the stadium. 12-year old and 15-year old rum poured over ice cubes, served in small plastic shot glasses. Kathleen and I had a couple of those. Delicious and potent!

I wore my Chennai Super Kings shirt to the match and reached the Oval with plenty of time to spare. We went down the seats nearest to the dressing room, and lo and behold, Dwayne Smith, now with CSK, was walking down the steps from the pavilion for pre-match warm up. He acknowledged the shirt and gave a thumbs up. In an unrelated note, he scored a century, filled with his typical powerful bashes to the leg side, but also plenty through offside, with one of the sixes almost carrying to our seats. Tridents won easily even though the final scoreline belies the one-sided nature of the match.

There was a Pedro Collins sighting too.

I was scheduled to go to another CPL match today but I got last minute information that I would be able to conduct a telephonic interview with a West Indies legend. So I decided to skip the match(and a thriller it had turned out to be, sigh!) but after waiting for three hours, it has come to nought. However, there is still some hope that I could get it done over the next couple of days. Let’s see. 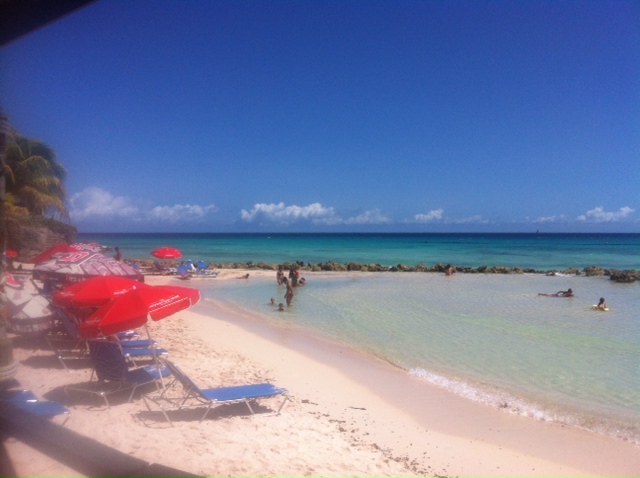