Presence. Colin Croft has it. The towering height, booming voice and an infectious smile make him the center of attention everywhere he goes. He doesn’t take himself as a former West Indies cricketer too seriously (“I don’t get you guys gushing about it, it was just a job!”). He is 61 years old but doesn’t look a day older than 50. He says he still runs 4-5 miles a day, like he used to as a kid in Guyana. He chews gum in a typical Caribbean style that oozes swagger and nonchalance.

I came to know that our paths will cross in Trinidad at the end of the Couch Talk podcast he appeared on, as I told him about the World Trip. He promised that he will definitely meet us in Port of Spain. I passed along my phone number to Crofty (as he prefers to be addressed) and I received a call within the hour. Crofty offered to drive to us and take us to a business meeting he was going to, and so we tagged along.

As we walked in to the foyer of the Hyatt, local Trinidadians milling about chattering away took one look at Crofty and shouted hello to him and rushed forward to shake his hand and have pictures taken with him. I filled Kathleen in with a little bit of back story about Croft and she began to understand the scene as well. I was like a kid in a candy store, being so close to a member of the fearsome West Indian quartet and so near to the greatness and everything the West Indies team of the 70’s and 80’s represented.

We hung out at a bar afterwards and Crofty spoke of his life post-West Indies cricket. He only had a Shandy and I listened to him keenly. I didn’t want to go prying and ask him specific questions about any aspect of his life but I could tell he was more than ready to share his story with two strangers he had only met a few hours ago.

Around Crofty you can not help but smile. His voice has a musical quality, and he speaks to you with the ease of an old friend. He is happy–in general, but also by choice. It is a conscious decision for him, and his happiness is almost constant. Every now and then you see something else behind his eyes–a glimmer of sadness maybe, or disappointment, perhaps –but it is always fleeting, a cloud passing briefly in front of the sun.

He talked about going to university, finishing pilot school, being a primary school teacher, playing for West Indies, World Series Cricket, and of course the fall out from playing in apartheid South Africa. Since his cricketing career, Croft has worked in flight operations at airports, as an assistant engineer, as a bus driver in Disney theme parks, in Wal-Mart, in U.S. Postal Service, to make ends meet. “You’ve gotta do what you’ve gotta do” he says very matter-of-factly.

He has been working recently, during ICC T20 World Cup 2014, as an on-air analyst for ESPN International (for the USA-Caribbean feed) and previously has done work with Sky Sports, BBC, Channel 9 and other broadcasters. He writes a regular column for a Trinidad newspaper but he wants and needs more work as commentator, columnist and analyst. He says he is always looking for any work to add to his income. He wants to find a way to get a gig during West Indies’ upcoming tour to South Africa in December 2014 and also the World Cup in 2015. It breaks your heart to hear this giant of a man doing the difficult balancing act of seeking help while still maintaining his pride.

“I’m never late”, springs out that recognizable voice from near the nets as we enter the Queen’s Park Oval. We had bid our goodbyes previous night, with a plan to meet at 11 AM at the Oval. It was 11.08 AM. He greeted us warmly and took us on to the ground where he took his record 8/29 against Pakistan in only his second Test match. That record still stands as the best bowling figures in an innings for a West Indian fast bowler.

It was a surreal feeling to be talking about a player’s career best achievement on the very same turf where he did it in 1977 versus Pakistan. I wasn’t old enough to see it and I have only read about it.  To hear it from the horse’s mouth itself, it’s a thrill of a lifetime. Imagine Sachin Tendulkar telling you about his 241 not out, while you are gently strolling along with him on the center pitch at the Sydney Cricket Ground!

Crofty introduced us to the groundskeeper Ron Faria, who used to be an opening batsman and wicket keeper for Trinidad & Tobago and the talk centered around the green pitch that welcomed the Indians at Lord’s for Test No.2. Quickly talk turned towards the nature of pitches around the world and the standardized strips rolled out everywhere which guarantee Tests going the full five days but kills the contest between bat and ball.

We made our way across the turf to the CL Duprey Stand across from the pavilion and as we took seats in the lower level of the stand, he reminisced about the Trinidadian crowd back in those days. “They used to be lot closer to the action on the ground, and it felt as if they were right on top of you. No one wanted to field in the deep because, Boy, if you messed up they let you know.” 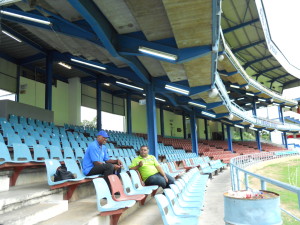 I wanted to know more about the great West Indies team he was part of and how it was to be playing under Clive Lloyd’s captaincy. He recollected his memories from the “8 for 29 Test”, as he likes to call it. “I remember walking back to the pavilion at Lunch and looking up at the old scoreboard. Against my name, it said 3 for 21. I thought to myself, “Not a bad session of work”. When we were in the dressing room, Lloyd told the boys to be ready to bat for two days. That was the attitude we had, that we would blow the opposition out. We came back out and I took 5 for 8!”

You can sense the pride of his great accomplishments in his voice, but Crofty doesn’t bask long before reminding us that it was only a game and it was just a job for him. “So what if I could bowl at 95 miles an hour?” he asked me many times during our interactions. Usually I responded with only my incredulous look at the man thinking it isn’t such a big deal to be able to do what he did and be part of the greatest cricket team in the history of the sport. Yet, the parallel track to the story of Crofty, of an international career that promised so much more cut short, and of an outstanding yesteryear cricketer struggling to find proper work despite so many qualifications and experiences is pretty sobering.

Crofty knows the roads well, and zips us along towards the airport. When he sees a plane he can tell you what flight it is, and where it is headed. He offered to take us to the Piarco airport as we headed on to Barbados, the second stop in our world trip. He was, once again, on time. In fact a few minutes early to pick us up.

“You don’t know the real Caribbean, boy” is his refrain as we drive towards the airport. The word “real” is pronounced with a lilting quality, and he is serious but smiles as he says it. He uses it when pointing out a bridge under construction some 3 years in the making, seemingly built to nowhere. He uses it when telling us what streets are safe to use, and which we should avoid in the dark. He uses it when explaining how a man who was once part of the greatest team of cricketers cannot get work in the region he once represented.

We made a stop on the way to the airport as he wanted to weigh something at the FedEx store. I hopped out and joined him as he opened the trunk of his car. It was a red cricket kit bag and I thought he was probably shipping some cricket gear to someone he knows. He opened the kit bag to reveal dozens of autographed cricket bats – of players you watched over the years and celebrated, many famous and some infamous. He is contemplating giving away all of this memorabilia to a cricket museum in India, among other places that would have much better use for them than some dirty bar. 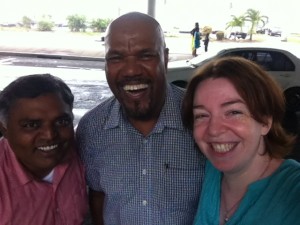 A selfie with Crofty as we said our goodbyes.