This is my third time in Trinidad and almost every time I have spent all my time just in Port of Spain. It’s an interesting town with a mixture of old influences and industrial landscapes, rumbling with typical metro-like expansions like malls. There are streets in one part of town reminding of the British Colonial times such as King Street and Duke Street, and another part rekindling the past for many that was left many thousands miles and multiple generations away such as Cawnpore Street and Benares Street, and French names reminding of the Creole influences.

The foods here also are quite varied and strongly reflect the roots of all the peoples that found many different ways to come in and inhabit this beautiful island: Indian, African, Lebanese/Syrian, Chinese and Creole. 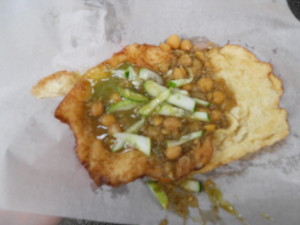 Doubles are a Trinidad original, and sum up perfectly the way the different backgrounds influence each other. The ingredients are simple, and delicious. Channa (chick peas) on top of pieces of puri (fried dough) and covered in shredded cucumber, and a spicy concoction known only as “pepper.” (Some Doubles joints do not add cucumber). Depending on the level you want your mouth to burn for days after you can order just “slight peppah” or “plenty peppah.”

Double stands are ubiquitous in the morning, and people walk up and drive up in all manner of business suits, school uniforms, or bedraggled day clothes (in our case) to grab one or two or three. The stands are temporary, and supplies are limited to what they have brought with them. They spoon sauces from buckets and expertly twirl paper wrappings around steaming doubles to hand out to the masses. Every stand has a water bottle nearby propped up on some bucket or another for people to use to wash their hands so they can eat right there on the spot. Street food allows for this unique set up where people of all kinds stand around together in pleasant silence, eating their doubles with bodies bent out to try to keep any from falling on their clothes.

Doubles Stands can be found on a street corner, or side of the highway or even in a Parking lot.

A variation of the Doubles is the Triples where instead just 2 puris, you get three. Two puris form the base and the third is used as a scooper, similar to how Indians eat daal/sabzi with a piece of naan.

Another breakfast food is Aloo Pies. These are made up of potatoes and spices stuffed inside a pocket of fried dough about the shape and size of a shoe insole. They aren’t covered in sauce the way doubles are, and are great hand food. Many mornings we would buy a number of doubles to eat now and some aloo pies for later. 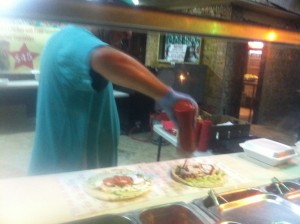 Garlic sauce, ketch up and bit of pepper added to the gyros.

In the evening on “the Avenue,” as our street was called by the locals, Gyro stands that had stood silent and shuttered during the day began to open up. They are abundant, with at least one every block or so, each boasting similar options: falafel gyro, lamb gyro, chicken gyro, shrimp gyro, mixed, garlic wedges, and fries. There is also a special “Trini gyro,” which has pineapple added to it. They are very affordable; Falafel gyro costing about $3.50 and those with meats $5. There can be mixture of meats too, such as shrimp-lamb which go for $6. Our favorite was the Hassan Gyros because they always had Falafel and their lamb was so sweet and tender that it melted in your mouth. 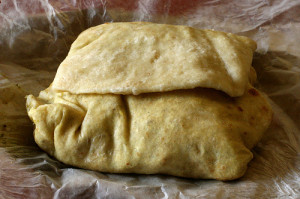 Roti is another food item of choice in Trinidad that is of Indian influence. The rotis are usually wrapped in to a square shape (if you have food at Mad Mex in the U.S., it resembles their Burritos), stuffed with rice, beans and meat of your choice. You have vegetarian options as well with curry potatoes. The first time I came upon Roti was in St. John’s, Antigua during the 2007 World cup at a Guyanese restaurant and I found them here in Port of Spain as well. It’s also a common item during the lunch at the Queen’s Park Oval but the lines are usually very long. 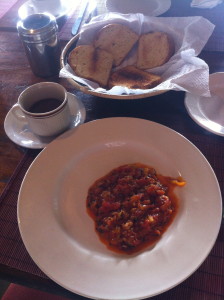 Choka is a breakfast item that’s eaten with bread. It comes generally in two kinds – Roasted Bhaigan (egg plant), Roasted Tomatoes (and Potato, fish etc.) but it’s usually served in a sit down restaurant and only before noon. The main ingredient is cured dry, fire roasted to get a smoky flavor and garnished with cilantro. From little I gathered, the roots of this dish goes to the Indian state of Bihar.

Of course, you have the options of Jerk chicken, and all kinds of fast food joints such as Wendy’s, KFC, Dominos Pizza etc. There are plenty of Chinese restaurants all over town.

One other thing to do while in Port of Spain is to visit the Queen’s Park Savannah, which is a very large open space that serves as a venue for music acts, concerts, shows and of course, street food. It is usually lined with coconut stalls where fresh coconut water can be had, and we strongly suggest you have it. On friday and saturday evenings, the Savannah is a hubbub of activity with a variety of food stalls serving corn soup to doubles to gyros, fried chicken, pork and rice etc.

Even if you end up in Port of Spain during non-cricket times, like we have this time, it is worth making the trip just for the delicious, affordable food!

Tweet
This entry was posted in Featured, World Trip and tagged Food, Trinidad and Tobago, World Trip. Bookmark the permalink.