Posted on March 1, 2014 by thecricketcouch

I’m a big fan of the Nature channels on TV – National Geographic, Discovery Wild, and Animal Planet etc. The programs that usually capture my attention are those dealing with predator big cats such as lions, tigers, leopards, and cheetahs. There is something incredibly brutal, breathtaking and beautiful in watching life unfold in the animal kingdom in all its truthful glory and gory.

The predator-prey relationship gets played out on a cricket field too. When a fast bowler on the prowl senses a weakness and smells blood, tries to go for the kill. At Port Elizabeth, a week ago, Morne Morkel in the first innings unleashed the accurate around-the-wicket short-pitched bowling, softening up the Aussies. Dale Steyn performed the coup de grace with fast bowling of highest quality, evening the series up. In the first Test of the series at Centurion, Mitchell Johnson terrorized the South African top order and gave the Aussies the early advantage.

In Cape Town, with the backdrop of the picturesque Table Mountain, Morkel once again set about inflicting body blows to the Aussies. This came soon after the leader of the pack, Steyn, had to leave the field due to a hamstring complaint. The contrast of the photogenic, sun-soaked serene ambiance and the bruising that was unfolding on the pitch could not have been more stark.

Michael Clarke, troubled by a bad back, has been the target of the opposition for a while now. At home, against the English, he thwarted the early attempts at intimidation by counterattacking but the downfall of the English in the Ashes was so swift, that they never really went about sustaining the line of attack that Clarke had shown himself to be vulnerable to.

Things have been different in Africa. Like the land itself, the eye catching natural beauty is never really too far from the harsh realities of life.

Jarrod Kimber, writing on Cricinfo, has narrated the sequence of events. A full on blow to the left arm that could have easily fractured it and put Clarke out of commission for weeks, a ricochet off the shoulder on to the left side of the jaw, a jarring blow to the ribs, a punch to the gut; all in one spell. There was a blow to the right thumb towards the end of the day’s play as well. 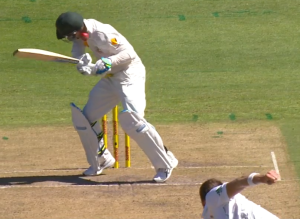 When the voice of the narrator on the wild life documentary begins to hush, it is time for you to pay attention to the screen. The Cat has caught the scent of the kill and is on the move. Ominous background music heightens the sense of the anticipation and your neck hairs stand on end, as the cat lowers itself to the ground before launching on a dead sprint to assault the prey.

The Newlands crowd enjoying their beer and sun shine, were looking for a reason to get behind the home team, as the Aussies, led by David Warner, had begun to take control of the Test. As Morkel delivered one of the bouncers and caught Clarke hurriedly ducking, the crowd found its voice. For the next few overs, as Morkel would make his quirky semi-circle on top of his bowling mark, the applause and roars would begin, reaching a crescendo as the long limbed South African hurled the round red missile looking for targets on Clarke’s body. This was as close as it gets to the other side of the African life: Predator-Prey. This was Test Cricket’s tryst with Gladiatorial spectacle of ancient Rome.

The pictures below show the pitch map and the “pitch mountain” of Morkel’s deliveries to Clarke on the first day. Clarke faced 48 deliveries spread over 3 spells from Morkel and scored 26 runs (2×4). More than half of the 48 deliveries were pitched at least 8m away from the stumps. 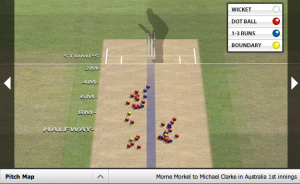 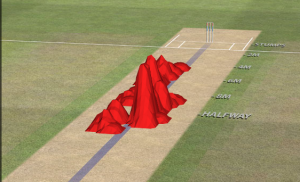 What is conspicuously absent in this barrage from Morkel to Clarke is the follow up to all his jabs – short-pitched deliveries, with the right hook to deliver the knock out punch. The full delivery, following the short ones, trying to induce the Clarke -camped deep within the crease to play a drive and thereby presenting catching opportunities to the slip cordon, never was delivered allowing Clarke to focus just on survival. Survive, he did.

It is incredibly illuminating to watch lions go on a hunt as a team. As two of them ambush, two others sit on the perimeter to ensure the prey doesn’t escape. However, when a lone Big Cat goes on a hunt, the statistics is that three out of four times, the prey escapes. Morkel missed the services of Steyn today even as he manfully tired to coax any life out of the placid pitch.

Clarke was bruised. He was battered. But he has survived to live another day. A lesser batsman would have thrown it away but Clarke persevered and is now poised to reach the 27th century of his Test career.