Posted on January 27, 2014 by thecricketcouch

Mr. David Becker, formerly the head of legal at the ICC 2007-2012, sent a press release to a few journalists back in October 2013. It contained information that, though commonly suspected, put it on record some of the bullying and strong-arming tactics of BCCI’s President N. Srinivasan at the ICC board table and his general misgivings about governance at the ICC. Mr. Haroon Lorgat, Chief Executive of Cricket South Africa, according to one of the journalists that had the press release in their possession tried not to have it published, as he felt it could jeopardize the Indian tour of South Africa.

The shortened Indian tour to South Africa has come and gone, and ICC has since decided to conduct an independent third party investigation in to Mr. Becker’s statement and also Mr. Lorgat’s role in that statement.

Here is the press release that Mr. Becker first sent out, and later wanted to retract, in full. (Mr. Becker’s contact phone number and email address have been removed for the sake of privacy). 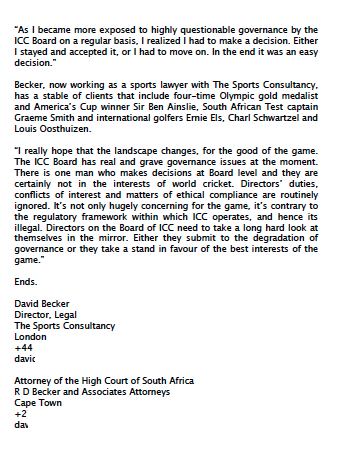