Posted on December 9, 2013 by thecricketcouch 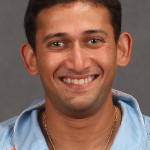 In this episode, former India cricketer Ajit Agarkar talks about his accidental origins as a fast bowler, the early comparisons to Kapil Dev, the infamous series of ducks, Adelaide Test of 2003 where his 6-41 led India to an improbable Test win, his controversial withdrawal from Mumbai’s Ranji team in 2011 etc.

This episode was first published on ESPN Cricinfo’s The Cordon.