Two Shots for a Lifetime

Posted on August 16, 2013 by thecricketcouch

It’s been 23 years since Sachin Tendulkar scored his first century in the international stage. It feels like only yesterday when a young boy walked off the field in the company of Manoj Prabhakar at Old Trafford having saved a Test for India, with his bandaged Power bat politely raised in acknowledgment of the cheers, shirt slightly open, sleeves rolled up, with oversized pads that looked to be covering half his 17 year old body. Now he has 99 more of those hundreds.

It wasn’t until Tendulkar was on the threshold of 100 international hundreds that I had the opportunity to see him wield the willow, in the flesh, at Lord’s. But the 100th hundred wasn’t to be. Not for another 9 months. A seemingly made up stat looked to be weighing down the man who had shouldered the burden of billion expectations rather quite easily for 23 years. Such is sport.

I saw him ping the English bowling at Trent Bridge with a pretty fifty. On his home turf in Mumbai, he toyed with the West Indians to fall only 6 short. A majestic 73 at Melbourne was cut short by a Peter Siddle ripper. I also witnessed an innings that promised a lot more than the eventual 80 when a defensive prod found Hussey in the slips at Sydney. I have seen him bat in 7 Test matches in the space of 18 months. It was like an itinerant father trying to make up for all the lost time, of playing ball with his son in the backyard. There isn’t much time left now – got to make the most of it.

Tendulkar’s mastery with a cricket bat in hand has been described as many things, mostly invoking “Genius” and “Great” pretty generously, and without reservations. The Average also noted that of all batsmen, he looked the closest in the way he used to bat. There isn’t a shot in the book that he can’t play while looking, in equal measures, graceful and authoritative.

Some batsmen are remembered for a particular shot that they played so well that they become the benchmark for it. This is what the commentators call it the “typical <insert player name> shot”. A Brian Lara pull to square leg, where he finishes as expertly balanced as a gymnast with one leg raised in the air; a dreamy VVS Laxman’s wristy flick; a King Viv hook (although he owned the leg side from backward square leg to long on), Ricky Ponting’s front full pull; a Virender Sehwag’s flay over backward point; Even as you read this, I’m sure your mind is already recreating those shots by those batsmen.

There was no one that could execute the straight drive with as much technical correctness, elegant ease and pin point precision as Tendulkar has, over the years. No bat-maker’s label reacquainted itself with bowlers of the world as much as Tendulkar’s.  There have been countless drives that have scorched past the bowlers, on either side of the wicket, and I witnessed two from the stands that stirred emotions in me like nothing else.

“He just sort of leans on it… it’s just a punch. There’s no big follow through, sort of thock. The head sort of goes to the off-stump and he punches it through mid on.”

“You sort of think that he hasn’t hit it, but it just rockets back past mid on. It is an exquisite shot.”

Those words of Nasser Hussain and Chris Cairns, respectively, were about Tendulkar’s signature shot, the on drive.

I was lucky enough to be at the Melbourne Cricket Ground when Tendulkar was in one of those moods where the conditions seemed to be irrelevant and the opposition, utilitarian. After a tentative start just before Tea on Day 2, Tendulkar opened the final session of the day, turning the clock back.

I was sitting in the first row, leaning on the fence, right next to the sightscreen in the Great Southern Stand along with a friend when Tendulkar bisected the gap between the non-striker (Rahul Dravid) and the stumps off a good length delivery from Ben Hilfenhaus. At that instant, in that stupendous moment of cricketing artistry, the joy I felt in watching something so sublime knew no bounds. Euphoria from having seen something supremely special washed over me—the tingling down the spine and the hairs on its end, that only a certain man with a willow in hand caressing a leather orb could cause.

My friend and I leapt out of our seats, cheered and high-fived. If not for that inner voice telling me “Don’t get arrested”, I was ready to jump across the fence and rush across the hallowed turf, to have a closer look at divinity in whites. There aren’t words to describe exactly what I felt at that moment in time. I remember thinking that the only way to convey it to him would be to give him a tight embrace and hope he understood. He surely would have. He must. 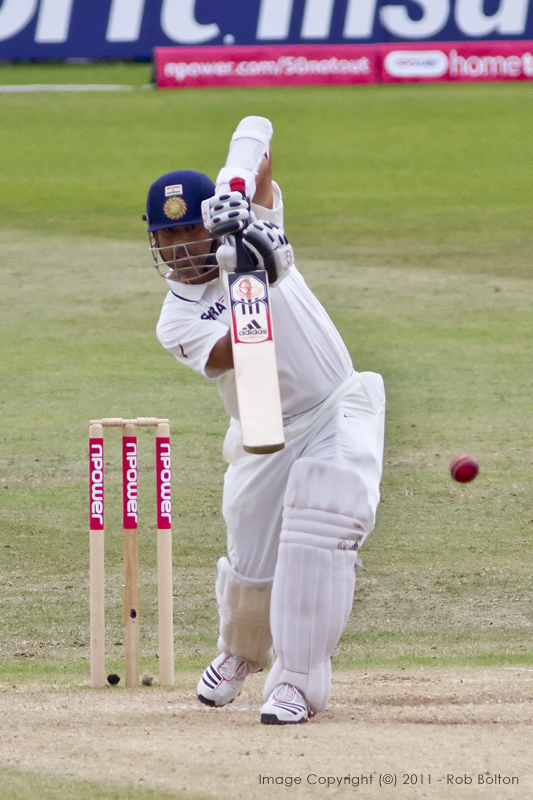 Trent Bridge, 2011. India soon to be halfway to a 4-0 shellacking and losing their Number One ranking in Tests to England. Faced with a monumental 4th innings target, Laxman and Dravid were already back in the hutch and the score was 13/2. I was seated in the Radcliffe Road End Lower Level, from which James Anderson was operating.

The arrival of Tendulkar to the crease almost always seems to put the match situation on hold, amongst the fans. After the standing ovation, the fans return to their seats, elbows resting on knees and hands under the chin, unbeknownst creep forward to the edge of their seats, in an avid expectation of a spiritual experience.

In a passage of play of 3 overs, Tendulkar unfurled a couple of off drives of the highest quality against a swing bowler who was on top of his game. Anderson adjusted his fielders at extra cover and mid off only for Tendulkar to find the gap when there was none.

Three slips. James Anderson with a pretty new nut, swinging. Tendulkar pressed forward, leaned in, transferred the weight, covered the line, the high left elbow and soft hands guiding the bat to meet the swerving ball soon after it pitched, screeched it past mid-off, straight towards us. Hallelujah! My English friend Rob, who had snuck in his camera with telephoto zoom lens, captured the moment that forever will be etched in my memory.

The reverberation of those shots still continue to echo in my subconscious – long after they were played; long after the crowds stood up collectively as one and applauded till their palms were sore.

My father-in-law is a wise man, and I’m not just saying that for the obvious reason. I like engaging him in conversations on a range of topics from social issues to sports, from politics to religion and everything in between. During one of those chats, he once told me the feeling he had when he held his firstborn child in his hands for the first time. He said, “I could see infinity”, referring to the bond between him, the father, and his son.

I do not have any kids, but I think I know what he means.