Posted on August 2, 2013 by thecricketcouch

Gideon Haigh said during a recent interview that despite the overwhelming dominance of England over Australia in the Ashes so far, the 10-0 predictions may not actually come true. He thinks that “there is a potential for Black Swan kind of event to disrupt the series to alter the balance of power.”

One such incident was when Glenn McGrath hurt his ankle as he trod on a ball, on the morning of the 2nd Test at Edgbaston during the 2005 Ashes that has been hailed as the “Greatest ever”. Who knows exactly how that series would have turned if McGrath had stayed fit? Perhaps, Australia would have continued on in their demolishing ways, following up on their win by a margin of 239 runs at Lord’s earlier.

England, fortunately for them, haven’t had any such freak injury to any of their frontline bowlers or key batsmen. However, there was something bizarre that happened on Day 1 of the third Ashes Test at Old Trafford that could have interrupted England’s momentum and perhaps with it, the possibility of 10-0. England demonstrably are a much better, settled side than Australia and that message has come through quite clearly, not only based on what has happened on the field, but also the shenanigans that has surrounded the Aussies since they landed in England.

England’s superiority has also been established in the way they had appealed for review of umpiring decisions: disciplined and damned sure. Where as, Australia’s technological hijinks can best be described as a fool and his money – soon parted. 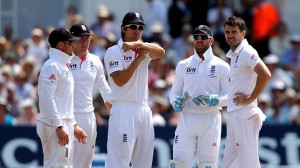 The shocking thing, and if the course of events take an irreversible about turn, then, the Black Swan event of this series, would be that England had no reviews left when Steve Smith, then on 24 and Australia 191/3, was hit on the pad by Stuart Broad. Umpire Tony Hill adjudged not out, perhaps, having doubts about the point of impact, but Hawk Eye showed later that if England had had a chance to challenge the decision, would have sent Smith packing and bringing on David Warner, back from his sojourn to South Africa. Who knows how that would have turned out? (Well, we have some idea!)

Smith had scored an additional 46 runs at close of play on Day 1 and in partnership with his skipper, added another 112 runs, and provided Australia a great platform to dictate the match at 303/3. Eventually Smith was dismissed for 89 after a 214 run partnership and Australia seem well placed to at least end England’s Ashes win streak.

England lost their first review when a caught behind appeal (James Anderson to Smith) was not given by Umpire Marais Erasmus and third umpire Kumar Dharmasena upheld the decision– not enough evidence that he had actually edged it, and the second when Swann beat Smith and Hawk Eye showed the ball to be hitting the leg stump just a smidgen short of reversing the on field call made by umpire Hill.

Of course, all hell breaks loose these days – on social media and in the commentary box, when the Decision Review System (DRS) is involved. Many of them called the umpires incompetent and rubbish, and plenty of folks declared that it is the umpires that are preventing the DRS from delivering perfect justice every single time.

Sure, the Usman Khawaja dismissal was baffling in how Dharmasena handled it and Cricket Australia CEO James Sutherland has sought clarification from the ICC on the issue. Tony Hill probably heard the noise and adjudged Khawaja out but based on the video/Hot Spot/Audio evidence that has been shown on TV, it looks like the umpires – especially the third umpire – did not get that one correctly.

However, allow me to make a couple of points regarding the two LBW appeals of Smith. In normal speed of on field action, were those reasonable decisions to make?

The first one off Swann, it seemed to me it had spun too much and in the second off Broad, the impact could have been just outside the line of off stump. Now, many of you could very well disagree with me. In fact, for every person agreeing with me, there would equally be those that would disagree. That by definition makes it a marginal decision and hence, Tony Hill was correct in how he adjudicated. It was a reasonable decision to not give out; it would have been a perfectly reasonable decision if given out.

I think with the technology wrench thrown in, people (players (current and former), commentators, fans, journalists) have forgotten what a reasonable umpiring decision is. What do we hear from the commentators when a decision is made? Well, it depends whether DRS is being used in that series. If it is a series without the DRS technologies available, the first thing coming out of the commentator’s mouth seems to be, “There is no DRS in this series”. And if it’s a series with DRS, the first thing you hear is, “Oh boy, are they going to challenge this?”

Somehow, it seems, it is okay to not look at the actual decision made, to see whether it was a reasonable one, made by the on-field umpire using only his senses, including the sixth – that of experience and umpiring conventions built over 100+ years.

And so, this has gone on to erode the faith in the set of umpires, whom the ICC considers to be Elite. Only the umpires can tell how much additional pressure it puts on them to know that every single human decision they make is going to be sliced and diced by millions with the benefit of two-dozen cameras and what not.

Former ICC Elite Umpire Simon Taufel has talked about the pressures of the job previously and the mental attitude required of the international umpire. “If you get something wrong, there are a lot of people who are prepared to act as experts and provide you feedback… If it so happens that you were not able to spot [what] one of the 29 other cameras have seen, if you have not done as well as the predictive ball tracking systems, or if you haven’t been as good as the heat seeking technology of hot-spot, you just got to cop it on the chin and move on.”

We, as fans and observers of the game, will always whinge. That’s just one-eyed human nature, really. ICC, in an ill-advised attempt to perhaps put a lid on the whingeing have let the technological genie out of the bottle. However, we have to recognize the tough job the umpires have, even with all the technology available, as they are not free to use it as they please and are bound by protocols. It would help in the overall discussion of technology’s role in umpiring decisions, and the subsequent reviews/challenges, for us to recognize whether a reasonable decision was made in the first place before trashing the umpires.