Playing with the Tail

Posted on January 2, 2013 by thecricketcouch

It is an intriguing job for the batsman slotted in at Number 5 or 6 in the batting order. He may be asked to drive home the advantage that the top order has achieved, or has to right the ship in case of a top order collapse. Most importantly, it requires the batsman to establish partnerships with not-so-accomplished compatriots and in a lot of cases, walking wickets. Successful Test teams generally have smart batsmen at positions 5 and 6 that can handle all of these demands effectively.

The year 2012 saw the retirement of one of those batsmen that exemplified what it took to succeed from the lower-middle order spot, VVS Laxman. The Test at Sydney will see the departure from the scene of another one, in Mike Hussey.

Hussey’s reputation as something of a magician that can coax valuable runs forging match-turning partnerships with the lower order was set early in his Test career. In only his 2nd Test, he put together 93 runs with Stuart McGill to give Australia the 1st innings lead against West Indies. In a little over a month, he put on 107 with Glenn McGrath for the 10th wicket against South Africa, a Test Australia went on to win, as was the case when he added 42 with Stuart Clark at Durban against the same opponent. 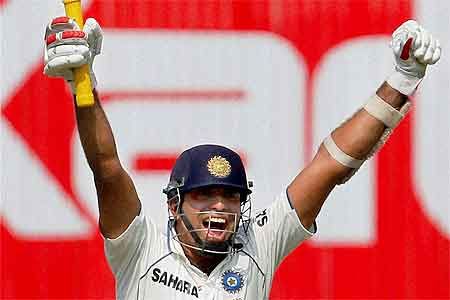 VVS Laxman has had his share of “get out of jail” acts for India, most memorably his stand with Ishant Sharma against Australia in 2010, and a crucial 70 run partnership with Zaheer Khan for the 8th wicket to help India register their first Test win in South Africa.

It makes one wonder how these two soft-spoken yet tough as nails cricketers performed with the tail during the time their careers overlapped and how they stacked up in relation to some of the greatest middle order batsmen of all time. The following table lists the average runs middle order batsmen (#5 and #6) put together in partnerships (per wicket) with batsmen 8, 9, 10 and 11, since Hussey made his debut on November 3, 2005. (Minimum qualification: 1000 runs; 10 lower order partnerships). 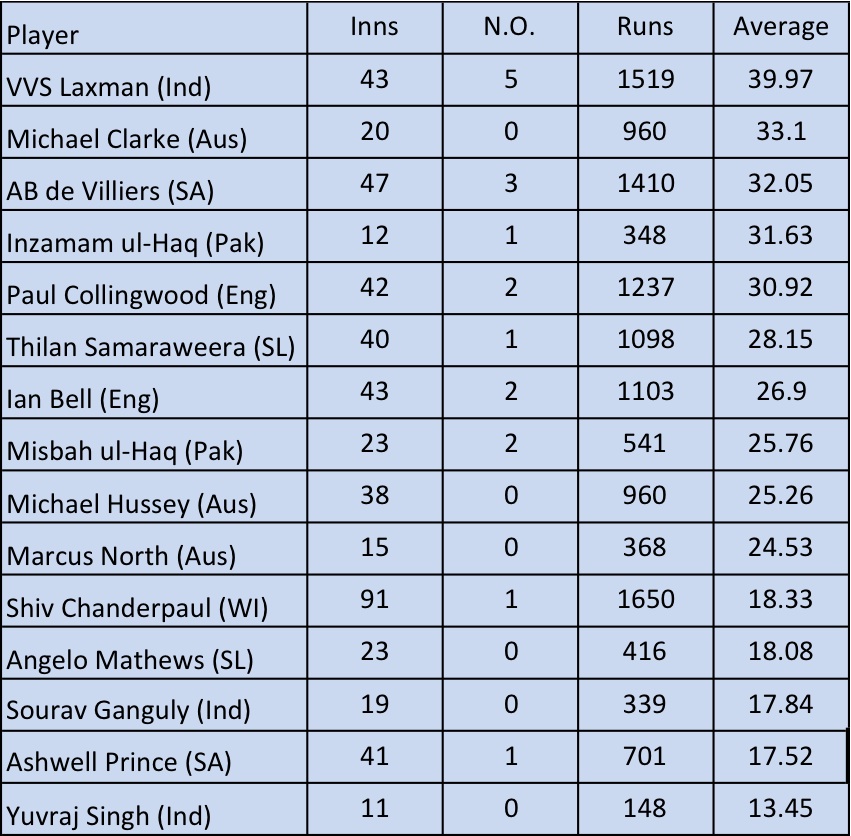 Note: The “Average” column indicates the average runs per wicket scored in a partnership by that batsman in company of the tail-enders. It is not the average of the middle order batsman itself, but of the partnership. Individual contributions to partnerships are not available unless one goes through every scorecard and BBB commentary. Historical data is insufficient in these aspects as well.

In the last 7 years (since Hussey’s Test debut), Laxman outperforms quite easily other qualifying No. 5 and No.6 batsmen with an average partnership of almost 40 runs with a tail-end batsman. Surprisingly, it isn’t Hussey that has performed well with the tail, but his Skipper Clarke. Chanderpaul though involved in most number of lower order partnerships also averages a lowly 18 runs in them, indicating quite fragile West Indian batting line up in the last few years. Another interesting take away from this table is that Yuvraj Singh and Sourav Ganguly who occupied the No. 6 slot at various times come up poorly with average tail-end partnership of 13.45 and 17.84 runs, respectively. This might indicate that Laxman had figured out ways to establishing lower order partnerships and coax runs out of the tail-enders.

To expand further, Laxman’s achievement batting with the lower order needed to be compared some of the all time batting greats. The name Steve Waugh immediately pops in to cricket fans’ minds when thinking about middle order batsmen that forged many a memorable partnerships with tail-enders.

The collection of players used for this comparison includes middle order batsmen (not regular openers) that feature in the list of top run getters of all time, with a few more added in such as Clarke, Hussey, AB de Villers, Martin Crowe and Andy Flower. The following table shows the average runs scored per partnership with a tail-ender by this collection of batsmen. 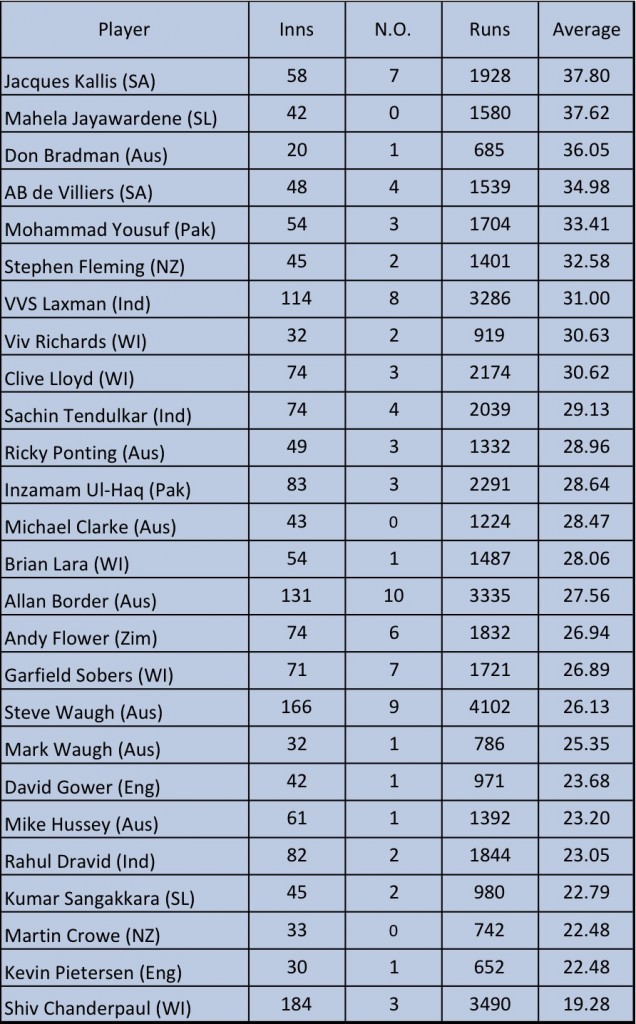 It shouldn’t be surprising to see Don Bradman’s name near the top of any list of batting accomplishments but the top 2 names of Jacques Kallis and Mahela Jayawardene aren’t the most obvious choices for anyone venturing a guess. (When I mentioned that Jayawardene was No. 2 on this list, a friend suggested I should do a “Home” and “Away” list). The fact that South Africa has had pretty good batsmen batting at No. 8 and 9 such as Shaun Pollock and Lance Klusener, and recently Vernon Philander, perhaps contributed richly to Kallis’ position atop the list.

Laxman averaging 31 runs per partnership features in the top 6 while Hussey, whose start to the Test career would make us expect him to be featured near the top, actually finds himself near the bottom of the table. Steve Waugh, Allan Border and Chanderpaul who have amassed the most partnership runs with tail-enders also feature in the bottom half of the “Average” table. 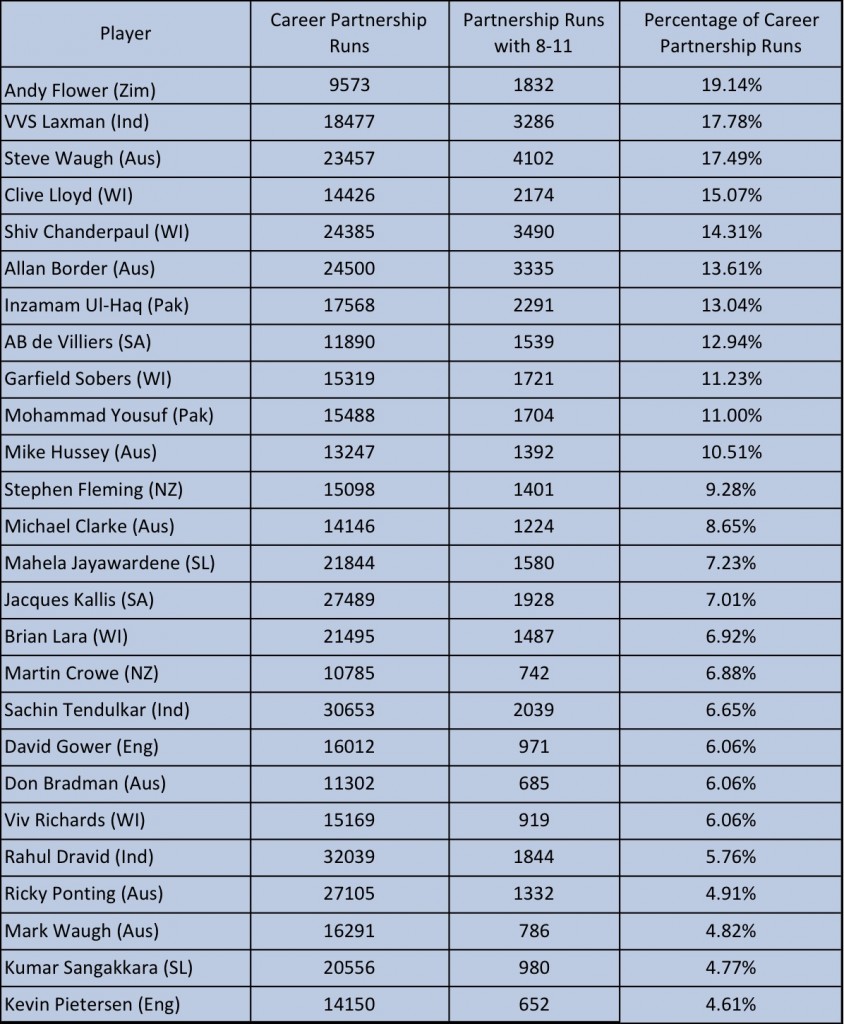 All the usual suspects claim their spots near the top of the table, with Hussey and Clarke slotted in the middle of the pack. Laxman nudges out Steve Waugh narrowly for the top spot amongst batsmen with more than 10,000 partnership runs. This could be used in an argument next time when someone brings up the question of “Who’s better playing with the tail?” From the looks of it, AB de Villiers might end up being the Laxman/Waugh of this generation.

The more accurate measure would have been the percentage of (individual) runs a middle order batsman scored as a percentage of his career runs but for reasons mentioned in the note earlier, this is not easy to do. A couple of other things to consider: Change in the batting average of the tail-enders and the number of balls faced when they bat together with batsmen of the likes of Laxman and S. Waugh, but that’s for another time.