Posted on August 18, 2012 by thecricketcouch

My wife has a weird fear, although I suppose all fears are weird at some level. She has to have a blanket covering her neck when she goes to sleep, so that she won’t have her throat slit. I think it is from her childhood, when her martial arts teacher suggested that she should be ready to defend herself even if someone is going to cut her throat, in her sleep. I don’t know how you can defend yourself in sleep, but the Karate teacher had succeeded in giving her an irrational fear. Even in the middle of summer, when the temperatures are upwards of 100°F, she still has to have that safety blanket.

In the last few months, Team India lost its safety blanket. First, in March, Rahul Dravid retired from International cricket, and today, VVS Laxman, announced that he is retiring from playing for India, “with immediate effect”. It was a surprising decision considering that he was selected to be part of the squad for the home series against New Zealand, and the first test of the series was going to be held in Laxman’s backyard, Hyderabad.

Dravid and Laxman formed the blanket that Indian cricket fans had on, for the last decade and a half. When an early wicket fell, Indian fans were safe in the knowledge that the man from Bangalore, with impeccable temperament and remarkable defense was going to be walking in next. When the top order failed, fans were still secure that the man with the supple wrists and immaculate timing was yet to walk in. Not only were these two the safety blankets for the Indian fans, they also provided the cocoon in which Sachin Tendulkar (and Sourav Ganguly) could go to work. 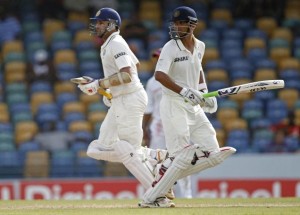 It will do no justice to bring up the memories these two fine, upstanding gentlemen had created for the cricket fans – not just of India, but the world over, in this space. Their impact is so profound that any captain enforcing the follow-on has to pause for a moment or three.

It isn’t just the gaping holes in the batting order that Dravid and Laxman are going to leave behind. Their retirements are going to be most acutely felt by the Indian bowlers when they don’t see the reassuring figures in the slip cordon. With their departures, a combined 345 Test catches are also going to be missing from the Indian lineup.

The retirement press conference was nothing if not a fine encapsulation of what Laxman is: thoughtful, patient and putting the needs of the team ahead of his own personal aspirations. Personally, more than the epic he had sewn together with Dravid in Kolkata, it will be the little gems that I will always remember about Laxman. The 96 in Durban, the 66 in Chennai, the 73 in Mohali, the 79 in Perth, and the 69 in Mumbai, all of them contributing to tough but dicey India wins. His overall record of 8781 runs in 135 Tests may not put him in the same category of “All Time Greats” but his contributions to the memory library of cricket fans all around the world easily belongs with the best to have ever picked up a cricket bat.

When I had the opportunity to meet Laxman, the topic of calls for his retirement did come up, and at that time, he felt he still had more to give and was keenly looking forward to the home series to right some wrongs. It is highly doubtful that the criticism by ex-India cricketers in the media about his continuing presence in the lineup despite poor returns in the tours of England and Australia hastened his decision. One doesn’t become a top-flight cricketer – in India, especially – without a thick skin. It is not like this was the first time his spot in the team was questioned either.

Perhaps, the prospect of becoming a charity case – with the selectors telling him that his selection beyond the New Zealand Test series is not a given – propelled this proud man to take this tough decision. He, like Dravid, has decided to go out on his own terms.

With Dravid and Laxman bidding farewell, Indian fans may fear that their team’s throat is exposed. Now, it is for the likes of Cheteshwar Pujara and Virat Kohli start knitting the safety blanket. In 4 days.