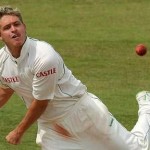 In this episode, South African cricketer Paul Harris talks about how he got to become a spinner, whether he feels hard done by the team preferring Imran Tahir over him even after 4 years of service to the team, his thoughts on people calling him a “buffet bowler” etc. He also talks about his debut test (vs India in 2007) and bowling to Rahul Dravid and Sachin Tendulkar, sledging, and Herschelle Gibbs’ comments about cliques in the South African team. He tells us the keys to the South African win in the test series vs England, the loss of Mark Boucher, and gives his prediction.