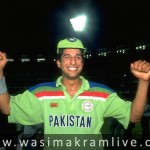 In this episode, arguably the greatest fast bowler cricket has ever seen and most definitely the greatest left hand fast bowler of the game, Wasim Akram, talks about his dismissal of Rahul Dravid in the 1999 Chennai test, what it takes to be a very good fast bowler, bowling with Waqar Younis, how he managed his health issues during his career, his views of Pakistani cricket amongst other things.