Has the countdown to Julien Fountain’s firing begun yet?

During the series decider of the Mobilink Jazz Cup ODI series, defending a modest but competitive total of 247 runs, the performance of the Pakistani fielders was something even a club cricketer who gets off his couch once a week to ham up with his buddies in the park would be ashamed of. There were straightforward catches destined for the players’ breadbaskets were dropped. Numerous run out chances were missed. There were countless number of fumbles, misfields and fielders letting the ball go through their legs. An easy defense of the total was botched and Angelo Mathews, aided by a handy lower order and downright filthy death bowling by Pakistan (especially Mohammed Sami), stole it with a flourish in the end.

During the post-match interview, Pakistan’s captain Misbah-ul-Haq refused to throw Sami under the bus and instead spoke in general terms and clichés. “”The way Mathews played he took the game away from us. We were 15-20 runs short. They bowled well at the end. Again, the fielding let us down. They really gave us a tough time, especially Angelo. [Jeevan] Mendis played very well too. We have to forget this and improve our performance in the Tests.”

Misbah could have gone on a rant about the general uselessness of his fast bowlers in the end overs and/or his butterfingered fielders. One would think the captain would give the team a dressing down after a performance like this. However, he was prudent not to do it in public.

You can lead a horse to water, but you cannot force it to drink. Perhaps what we need is more “Thirsty Horses” ? #justsaying

With that emotional and perhaps injudicious tweet, Coach Fountain probably has lost whatever little of the control and ability to inspire his wards, he had. Certainly Coach Fountain could have handled the issue behind closed doors but instead chose to air his views on his Twitter stream, when there was no compulsion for him to do so. It can be justified at least if he had made this comment in a press conference, if someone had asked him a pointed question about what he has been trying to do to lift the fielding performance of his team.It was a bit surprising to see a coach voluntarily pass such judgment on his players without any provocation. Perhaps, this was a preemptive tweet from him pacifying the fans. A cursory look at the reaction to that tweet on his Twitter timeline seems like it may have had the desired effect. 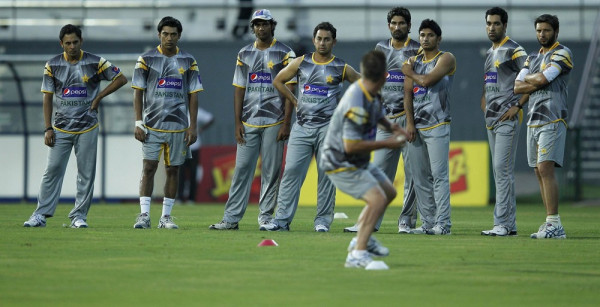 There is no question Coach Fountain must have been at his wits end with each and every one of those  fumbles and dropped catches but by insinuating that since the quality of the fielding isn’t improving with this current lot, Pakistan should be finding a whole different team is counterproductive. These are some of the best talent available in Pakistan and the team is not going to be overhauled overnight. By venting his frustration at his players in public – and indicating that he would rather have a whole new set of players – the current lot isn’t going to be ready to  work with him. If Coach Fountain thinks he is not going to be able to improve his current set of players and needs a different group, that only means one thing.  A coach is brought in to improve the performance of existing players and not to overhaul the team. The board is not going to throw the players overboard, which means, the countdown to his departure from his position as fielding coach of the Pakistan national team has just begun.

MS Dhoni has been asked the same question many times, pointedly, about the lack of athleticism in his team and he makes no bones about it. He is quite pragmatic in dealing with it. He usually says it is what it is and they will have to do the best they can to overcome their handicap, instead of throwing his players under the bus.

The Greg Chappell saga is a well documented one that drove a wedge in the Indian team and even polarized the nation. Whenever a coach takes on the players, there is usually only one winner in such situations. Zaheer Khan called the two year reign of Chappell as India’s coach as the worst of his career and he felt Chappell made him feel unwanted and other senior players insecure.

When a coach loses belief in his players, it is usually time for him to go. Jim Mora, head coach of the Peyton Manning-led Indianapolis Colts from 1998-2001 unleashed a rant during a press conference when the Colts were struggling in the 2001 season. Asked about his team’s chances of making the playoffs, Coach Mora responded:

What’s that? Ah — Playoffs? Don’t talk about — playoffs?! You kidding me?! Playoffs?! I just hope we can win a game! Another game!

Coach Mora had lost faith in his team’s abilities and was duly fired after that season. The Colts would go on to become one of the most successful teams in the NFL after Coach Mora’s departure and even won Super Bowl XLI in 2006.