A Simple Metric to Understand Batting Efficiency in the IPL

Disclaimer: Statistics are like miniskirts. Wear them only if you want to.

As I was researching on Eddie Cowan before I interviewed him on Couch Talk podcast, I came across an interesting tidbit of information he had mentioned in one of his ESPN Cricinfo articles.

In Twenty20 cricket, Michael Hussey, perhaps the format’s most consistent player, has his own yardstick on performance: the magic “160”. It is numerically no more than the addition of average and strike rate, but it gives him a rough indicator of how good a batsman is. That is, a player who averages 60 but strikes at 100 is as valuable in his mind as some who averages 20 but gets them at a better clip.

This got me wondering how Mike Hussey may have arrived at that magic number 160. Do teams keep track of the statistics (obviously they would) but not just traditional metrics such as batting and bowling averages, strike rates, economy rates etc., but combination of these to come up with “magic numbers” to assess player efficiency. Are there some basic metrics (or thresholds) that distinguish good players from great players and just plain average ones?

To verify Hussey’s theory, I dug through the statistics from the recently completed 5th season of the IPL. Of the 190 players that took the field for the 9 IPL franchises in 2012, 18 of them never got an opportunity to walk on to the field to bat, and 2 more never faced a delivery. Initially I used qualification criteria of minimum number of runs scored and number of innings but eventually settled on the criterion of minimum number of balls faced in the entire tournament.

There were 100 batsmen that faced more than 24 deliveries in the IPL 5, i.e. 90 batsmen faced fewer than 25 deliveries.  Chris Gayle was tops in the league, having faced the most number of deliveries (456) while Andre Russell, Dan Vettori and Abhishek Jhunjhunwala faced 26 deliveries each, bringing up the rear. Click here to look at batting statistics of the top 100 batsmen in IPL 5.

The mean of (Batting Average + Strike Rate) for the 101 players came to be 147.3 with a standard deviation of 28.6. There were 43 batsmen that had performed higher than the “magic” number for this IPL and consequently, 57 who were below it. The highest value was achieved, unsurprisingly, by Chris Gayle (221.8) and the lowest by IPL 4 sensation, Paul Valthaty (63.8).

I further categorized (as can be seen in the chart given below) these two groups of batsmen using the standard deviation as follows: 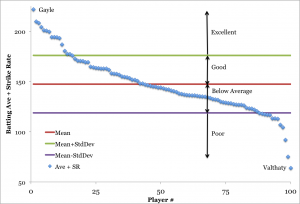 There were 15 batsmen who would be classified as “Excellent”, and the corresponding numbers for the other categories were 28 (Good), 44 (Below Average) and 13 (Poor), respectively. 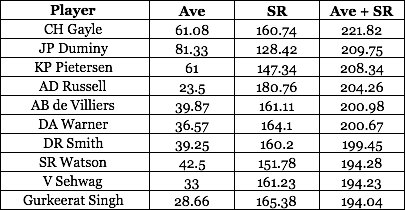 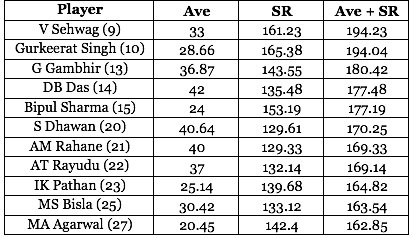 Since no discussion about batting can end without bringing up Sachin Tendulkar, he comes in right in the middle at number 50, with a value of 144.07 which finds him to be categorized as below average.  The magic number of 160, according to Mike Hussey (who comes in at one spot after Tendulkar at 51 with 143.2), would have been placed in the “Good” category with 30 players performing better. Of the top 30 batsmen, 11 are Indians (with Raina coming in at 30), with the top Indian batsmen performing nearly 14% poorer than their foreign counterparts. More relevant observations such as the relationship between the general batting position of the batsmen and their efficiency can also be made.

As can be seen, the Batting Average + Strike Rate measure can be used as a simple metric to see the efficiency of batsmen, moving away from the traditional stats of just batting average and strike rate. In a format that puts as much premium on scoring fast, if not more, as on batting average, it is imperative that combination of these measures provide a more accurate evaluation of a player’s contribution.

I’ve derived a similar metric for efficiency of bowlers in IPL 5 but that will be published at a later time. I’ll also be evaluating the players from the previous 4 editions of the IPL, season-by-season as well as cumulatively. The goal is to identify some basic “inflection” points (the transition from Good to Excellent etc.) for batsmen, bowlers and all-rounders and try to see the correlation to team success.

Note: I did try Bat.Ave*S.R. and other variations but essentially the distribution of players, in terms of effectiveness stayed the same. In addition, since this work began with Mike Hussey’s yardstick of Bat.Ave+S.R., I continued with the same.

Tweet
This entry was posted in Featured, IPL and tagged Batting, IPL 2012, Statistics. Bookmark the permalink.