On Ramdin’s Note to Sir Viv and the ICC

On Day 4 of the third England-West Indies test match at Edgbaston, after Denesh Ramdin completed his century, pulled out a folded piece of paper that carried the message “YEH, VIV, TALK NAH.” for Sir Viv Richards. Richards, who is in England as a radio commentator, had questioned Ramdin’s cricketing abilities following the string of low scores in the test series.  The ICC Referee for this match, Roshan Mahanama, has charged Ramdin with conduct contrary to the spirit of the game, and Ramdin has pleaded guilty to it, costing him 20% of his match fees. 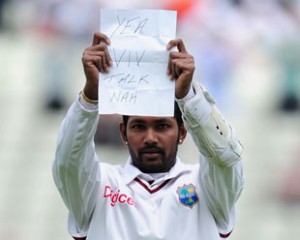 As expected, Twitter was abuzz with discussion on the fine levied against Ramdin and disappointment in ICC’s action to penalize Ramdin for a note that wasn’t abusive or anything of that sort. And of course, some outrage. After all, what fun is Twitter without some outrage!

There are several aspects to the issue that need to be addressed:

Of course, people are correct in questioning, as a fall out of this penalization, how far can celebrations of personal milestones go. Is it alright for a David Warner to do a gravity defying leap, or for a Harbhajan Singh running to square leg, with his team mates in tow and do a tuck and roll, or for a Rahul Dravid to shake his bat at the media box, or for a Nasser Hussain pointing to the number on his back? 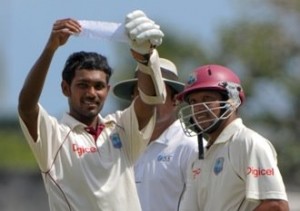 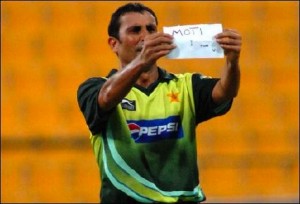 How about making personal statements on the field such as the one that Ramdin did? He has done the pull-the-folded-paper-out-of-the-pocket routine before. So has Younis Khan when he thanked his fielding coach Mohtashim Rashid with “Moti, I miss you” message on a piece of paper.

There is an important distinction that needs to be made in the above two sets of instances. The first set of celebrations is more spontaneous, spur of the moment type, whereas the latter is premeditated. Of course, one can say that even the gesturing to the media box with the bat was premeditated but there is no way of knowing unless the player himself says so. Hence, there is a cause for reasonable doubt and to believe that it was just a spontaneous reaction. Whereas, having a piece of paper in the pocket shows, without a shadow of doubt, premeditation. Authorities, as in sporting bodies and in legal system, tend to look at spur of the moment reaction more leniently. Only time even those are brought under the scanner is when they tend to be obscene, objectionable gestures.

Taken in isolation – I cannot stress that enough – Ramdin’s chosen mode of responding to a critic, in my opinion, was deserving of the punishment meted out by ICC. This of course, does not however, condone the ICC for its lack of uniform enforcement of its own code of conduct. Ramdin should have been pulled up before the match referee in 2009 when he premeditated his maiden century celebration. The match referee should have pulled up Younis Khan as well. Even though these two incidents have a heartwarming human element to them and were essentially innocuous in nature – as was Ramdin’s response to Sir Viv, they do however violate the code of conduct. 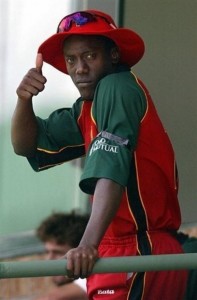 The most courageous display of personal conviction on a cricket field happened when Henry Olonga and Andy Flower decided to wear black armbands during the 2003 world cup to protest the Robert Mugabe regime in Zimbabwe and to mourn the “death of democracy” in their country. These two players -especially Olonga who had a lot more to lose including loved ones – were saying goodbye to their international playing careers and were choosing a life away from Zimbabwe, never to return.

ICC, if its code of conduct and the enforcement of the same were to be taken seriously, had to bring charges similar to that brought up against Ramdin against Flower and Olonga. As heart wrenching as that scenario was, the code of conduct within which the sport operates cannot be selectively enforced and should be non-negotiable. One exception here, another vague interpretation there, the edifice comes down crumbling. While announcing the penalty, the ICC should also have recognized the personal sacrifices and the courage displayed by these two Zimbabweans, since penalizing them would have been an extremely unpopular move with the fans and the media, and would have saved face for ICC, but more importantly, the right thing to do while upholding the code of conduct.

It is obvious that Ramdin felt aggrieved by the comments made by Sir Viv. He could have expressed his displeasure in a press conference, written a newspaper article or done any number of things but all of them, outside of a cricket field. If he wanted to show up Sir Viv so much, he could have done in the same arena that Richards used – the media. Using a cricket pitch to settle a personal score was a poor choice of venue by Ramdin, and on that specific breach of code of conduct, I do agree with the penalty.

In the National Football League (NFL), there is a strict code of conduct as to the celebrations after scoring a touch down, the behavior of players on the field (in terms of flipping the bird to the crowd, abusing the referees etc.) and even the player uniforms. Brett Favre makes a throat slashing gesture after throwing a touch down, he is fined; Terrell Owens pulls out a Sharpie marker from his socks to sign the ball he scored a touch down with, he is fined; Joe Horn pulls out a cellphone from the uprights (that he planted before the game) and pretend to call someone after the touch down, he is fined;  Chad Johnson wears a “Future Hall of Famer” jacket on the sideline to celebrate a touch down, he is fined; New Orleans Saints players wearing red and green ankle tape which isn’t part of their uniform, all of them fined. The NFL had become so strict that the players, both former and current, and the TV talking heads started calling the NFL, the No Fun League. However, one thing that the NFL cannot be faulted for is their consistent enforcement of the player code of conduct. NFL players still celebrate their touch downs and spectacular plays but when it crosses the line from spontaneous celebration to choreographed, premeditated celebration, the NFL without as much as a second thought brings the hammer down on it.

Some may complain, “All the ICC wants is for cricket to be played by humanoids” but it does nip in the bud such actions. If a Ramdin hoisting a sheet of white paper with four little words that aren’t really objectionable is allowed to get away with it, what is to stop another player bringing a sign that supports something that we may or may not all agree with. It is not the message that is the issue here. It is the action of using the cricket field as his canvas.

What really is required from the ICC is clarity in their player code of conduct – what can the players do and cannot do, and uniformity in enforcing them. ICC cannot be hiding behind the vast umbrella of “actions that bring the game to disrepute and spirit of cricket”. That is just too broad and too vague and allows itself to be abused by the players as well as players getting penalized to varying degrees for the same code breach based on the match referee’s interpretations and leniency. They have to do all the necessary legwork and try to lay the code of conduct without leaving too much for individual interpretations that lead to inconsistent application of the rules. Especially in a sport like Cricket where the players (and the match referees) are of different nations, cultural backgrounds and races, inconsistent enforcement of the code of conduct raises questions about the ability of ICC to steer the ship and preferential treatment of players from certain countries. As seen in the NFL, players will find newer and more creative ways to circumvent the code of conduct but the sport’s governing body needs to be constantly vigilant and keep up with it.