Posted on May 5, 2012 by thecricketcouch 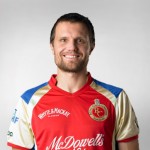 In this episode, Victoria/Australia/Netherlands fast bowler Dirk Nannes, currently with the Royal Challengers Bangalore franchise in the IPL, talks about his late start to cricket, the choice he had to make picking Australia over the Netherlands, the IPL grind, training in the IPL, mercenary aspect of some of the T20 players (including himself) and his team mate Chris Gayle, club vs country debate and his post-retirement plans. Follow Dirk on Twitter: @Dirk_Nannes