A champion spinner, sweet talker, brilliant competitor, degenerate gambler, bull shitter and master of theatrics, Shane Warne was many things. It was the combination of all these qualities that made his bowling the most riveting piece of action any time he was on the field. His ability to get inside the batsman’s head and make them dance to his pulling of the strings was a thing of beauty.

The dismissal of Basit Ali by Warne off the last ball of Day 3 at Sydney in 1995 is a stuff of legend. The discussion with Ian Healy and the content of their discussion, which added to the drama of the situation and the mind games that went along with it, is what separates Warne from any other bowler. Of course, he had the game to back up his talk. 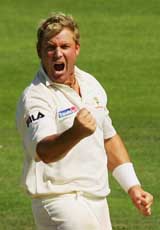 Shane Warne delivered rippers from time to time, the unbelievable deliveries but he also got wickets cheap purely because he had psyched the batsman out. Such was the case of Craig McMillan at Christchurch in March 2005.

The match situation: New Zealand had taken a 1-run lead in to their 2nd innings and were 78-4. McMillan had just come in at the fall of Nathan Astle (to Kasprowicz) and was on 4. What unfolded next was the famous Sharne Warne hit job. Wisden’s Andrew McLean described the break down of McMillan’s batting facing Warne thus: “In the space of five leg-breaks into the footmarks, McMillan, the right-hander, went from confident to confused to incompetent.”

It was the 32nd over of the innings. Warne was to bowl the 5th over of his spell. Warne, along with skipper Ponting, took a lifetime setting the field, with a new batsman in and all, making McMillan wait an eternity before he could face up. One can see McMillan mark the leg stump guard and walk around nervously. Warne started coming around the wicket aiming at the footmarks outside the leg stump of the right handed McMillan. The field: Slip (Hayden), forward short leg (Katich), short thirdman, point, and a fielder at 45 degree behind the wicket on the leg side, and the wicket keeper is Gilchrist.

To counter Warne’s around the wicket, outside the leg stump line, McMillan had opened his stance up a little, and was looking a bit like a right handed Shivnarine Chanderpaul. The first ball of the over was aimed at the rough and McMillan stuck his left pad out and kicking the ball away. The second ball, pitching slightly closer to the line of stumps but still outside leg stump, encouraged McMillan to offer a stroke and he obliged with a tentative prod resulting in a leading edge.

This is where the poker player in Warne came out. He has slow played a winning hand at the turn and has thrown the bait and McMillan has been suckered in. He picked up the ball on his follow through and very demonstratively demanded of his skipper that the man from 45 degrees on leg side be moved to the off side. He had put the thought in to McMillan’s head that he was more interested in attacking the stumps, like the 2nd ball of the over, rather than bowl way outside of leg stump. Yet, the fielder at 45 degree remained. To further emphasize that he was interested in attacking the stumps, Warne had now set up a silly point as well.

This had got McMillan confused, so much so that the 3rd ball of the over, a low full toss, he fronted up the pad to it rather than offering a shot and perhaps putting Warne away for a few runs, which caused Gilchrist to laugh. Much hilarity ensued on the 4th delivery, which was pretty much a carbon copy of the 3rd, and McMillan took it on his boot, rather awkwardly. Ponting (at silly point) and Gilchrist openly laughed, mocking McMillan at the bind he found himself in and even Warne broke out a smile, while rustling his hair.

Now, as any self-respecting top order batsman, that must have stung a bit. It must have been humiliating to see yourself in such tangle, with your opponents laughing at your face on your predicament. Now, Warne had McMillan on full tilt, to use a Poker terminology. Warne had reeled McMillan in all the way to the river, that McMillan had no choice but to play a shot at the next delivery.

The sucker ball came duly. Bowled off the same length as the previous two deliveries but only this time, wider of the wickets down the leg side, McMillan felt pressurized in to playing a shot and limply prodded a catch to Katich at forward short leg. McMillan was already shot in the head and was just waiting to be put out of his misery. The shake of the head from McMillan as he walked off the field conveyed as much.

This is the genius of Warne that everyone raves about. It is not only his ability to rip the ball across the batsman and maintain an accurate line of attack but also the ability to out-think the batsmen and to get inside their heads to sow the seed of doubt.

Tweet
This entry was posted in Featured, Miscellaneous. Bookmark the permalink.