Test cricket by virtue of spanning five days, allows for narratives to develop, within the scope of the game. The psychological back and forth, scars finding time to heal, strategies re-calibrated and the rapid cascading sequence of events precipitating in a thrilling denouement. Outside the game and in the stands, there is another narrative that is developed, the bond between the fans, the accidental acquaintances becoming more than just strangers held together by the tenuous glue stick of cricket, which matures over the five days and parting as friends with heavy hearts.

I watched all five days of the test (well until lunch on Day 5, anyway) with a local Trinidadian, Joey Garcia and hundreds of stories of cricket wonder were exchanged. The last three days, the Australian couple, Patrick and Sharon, joined us. We had made the grassy area between the Carib stand and the fence, near the player dressing rooms, our own for three days. 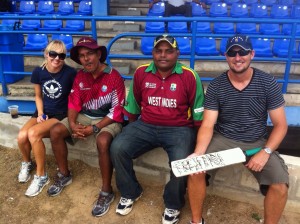 There were two other fans that had come to all five days of the test, two locals, but with diverging interests. Kelly Ann waltzed in to the Carib stand that was packed with the WI maroon jerseys on Day 1 in her bright canary yellow shirt and hung the Australian flag, is one, and the other is Hamilton, a middle-aged Trinidadian who doesn’t ever stop cheering the Windies on, walking up and down the stand, constantly urging the players. 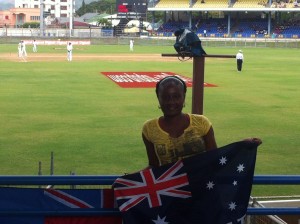 Kelly Ann is 27 and has been an Aussie cricket supporter since she was 10. That was when she saw her dad watching a test on TV and she was curious to know what the man in white, wearing pads and gloves behind the stumps was doing, stooping so low. She came to realize it was the Aussie wicket keeper Ian Healy and from then, she became a fan of Healy – probably the only one outside of the Healy family. As she learned more about cricket in general, she fell in love with the Aussies. “I don’t care much for the West Indies. My team is Australia. They bring a serious attitude to their cricket and they aren’t laid back like the West Indies. The Aussie players are so dedicated and committed on the field, and work so hard because they know, if they slip up, someone that is working doubly hard is going to take their spot in the team.”

This is only her second time watching Australia; the first time was during the 7-ODI series in 1998-99. Her favorite current Aussie cricketers are Mike Hussey, Michael Clarke and Shane Watson. She has visited Australia once, in 2008, but unfortunately, the cricket team was away on tour. However, she did the right thing, which is visiting the MCG even though it was only for a Rugby match.

What about the local son, Brian Lara? “It was the happiest time when he retired as he was the only batsman that I ever feared. As long as he was around, Australia weren’t safe.” Is there any other team or player(s) she supports? “If Australia aren’t playing, May the best win.” Player? “Rahul Dravid”, but she is quick to point out, “Dravid is a distant second to Australians.” 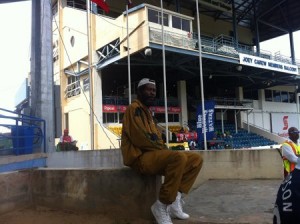 Hamilton remembers a lot of cricket that has been played at the Queen’s Park Oval and around the world. He gets tickets to the games from West Indies players, sometimes. Even as Darren Sammy was not being bold enough to attack the Aussies on the 5th day after they had been reduced to 94/5, he kept egging the team on with specific instructions to the bowlers.

Listen to this audio clip of him offering encouragement and advice in equal measure to Kemar Roach and Darren Sammy, and you will understand the passion for cricket that runs in the blood of the West Indies fans.

Hamilton’s favorite cricket memory is Brian Lara’s 277 at Sydney in 1992-93. As to the memories from Queen’s Park Oval, “I remember the drawn test between WI and Pakistan [from 1988]. It was a good test, ya know? I’ve seen Javed Miandad score a century here. I’ve seen the Golden Test here.” He fondly cites Courtney Walsh breaking Kapil Dev’s record as the highest wicket taker in test cricket as one of his most favorite memories.

As to the cricket itself, it was frustrating to watch Sammy keep a deep thirdman, deep fine leg and a deep point even after the Aussies were five down, before lunch. He bowled himself and Shillingford for quite a bit, letting the new batsmen Hussey and Matthew Wade get settled. At lunch, I had to leave the Oval but listened to the commentary on radio as we made our way to the beaches in the northeastern parts of Trinidad. The weather around Port of Spain was bleak with dark clouds hanging heavy. It would have been a miracle if this test had ended with a result different from a draw. As we checked in to the hotel, right on cue, the match was called off due to rain and bad light conditions. 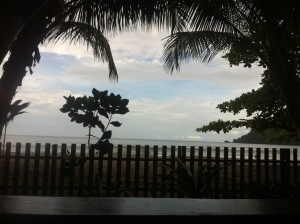