Days do not get a better start than someone telling you, “Oh, you’re a cricket fan? Would you like to meet Brian Lara?” A fellow traveller staying at the same Inn as we are, (whose first cousin was married to Joey Carew) is good friends with Brian’s mother, apparently. This may or may not happen, but the possibility of being in the presence of greatness is good enough for me.

On Day 2, WI got off to a great start, with getting Matthew Wade out early and looked set to bundle Australia out but the tail wagged. Rains came down after lunch. It was funny to watch one single member of ground staff trying to soak off the water on the covers, to get the ground ready for play. This is 2012 and we can still see this level of inefficiency in something as basic. Who’s getting screwed in this? Besides the elderly gentleman, member of the ground staff for the last 29 years, Ralph “Ralphie” Samlal, running around dragging the manual sopper, it is the fans. 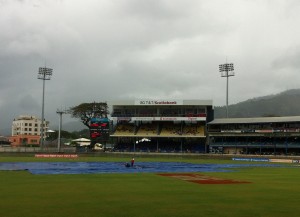 During the rain break, I tried to get the view of the ground from the different stands. You may remember that on Day 1, we were not allowed to leave and get back in to the ground. Apparently, that was because it was a big crowd on Day 1. Day 2 started with only about 500 people in the stands and the numbers eventually got up close to few thousands. Of course, I wasn’t allowed entry in to other stands. So, I kept walking around the Oval to the different gates to see if there is one security guard who will take pity on me, and there was.

The elderly gentlemen in the stadiums around the Caribbean are a tremendous source of historical anecdotes and funny stories. Constantine stand was populated with these so-called “crusty old men”. So I decided to chat up a couple of them. They were quite aware of what’s happening the world of cricket, all the way down to the IPL. So, what do they think of T20? “It’s exciting, maan! Test Cricket, it’s boring. Blokking and Blokking… We need excitement. Tests get only exciting on Day 4 and 5. Till then, it’s Blokk and more blokk.” I thought they were taking the piss and decided to continue digging around, but it is something they actually think. So what about T20 fundamentally changing the essence of cricket? “You can’t win by just blokking. Cricket, in the end, the winner is decided by who has more runs.” Hmm.

The last three days, I have been given company by a Trinidadian, Joseph Garcia, Joey, who is nearing 50, wanders in with a beer in hand in the morning, has plenty of advice for the players, has been a source of tremendous entertainment to me. He narrated a story from his childhood. “I think it was ‘74-‘75 tour of Australia to West Indies. [It was actually ‘72-‘73]. I was 10 or 11 years old. There was attest match here (Queen’s Park Oval). It wasn’t all big stands like now. Just mounds. People piled in. I wanted to see [Garfield] Sobers but he didn’t play that series because of some hamstring or something like that. There must have been at least 40,000 people here. I wanted to get a better view of the cricket and so I had got up to the metal fence and had put my face there to see more closely. I stood there for the entire day. At the end of the day, I was black as tar, but with tan lines from the metal fence. I got to watch Kallicharan and Kanhai. That was the passion for test cricket we had in West Indies. It is dwindling now, unfortunately.” 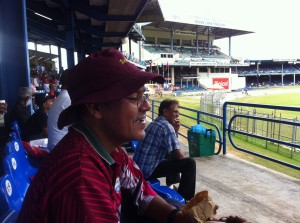 I met an Australian couple, Sharon and Patrick, who are in the middle of their 6-month trip to USA and Europe. They decided to catch some test cricket during the trip and have popped off to the West Indies. We were sitting in the grassy area between the double-metal fence and the seats, in the Carib stand. As someone keen on making a long trip like theirs, I was getting valuable input from them, when some official decided to show up and tell us to “get back in the stands”. We weren’t heckling the players, we didn’t try to jump the fence, we had been sitting there all day and done it the previous days too. Out of nowhere, Mr. Trevor Mohammed of the Queen’s Park Cricket Club, tells us that it is the ICC rules to not allow us to sit in the grassy area and we have to be in our seats at all times! Good job screwing the fans, yet again. 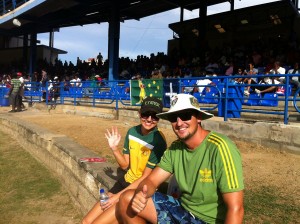 Here we are, two fans that have come all the way from Australia and me, wearing a West Indies maroon hat nonetheless, supporting cricket and some random official decides to screw our happiness. This, in a ground, run by these blokes, that does not have a big screen for replays, dodgy toilet facilities, no PA system on Day 1, and ridiculously primitive equipment to get the ground ready. Instead of looking for ways to enrich the fans’ experience at the ground, they decide to pile on. This isn’t just symptomatic of Queen’s Park Oval or the Caribbean either. The fans get shafted to various degrees across the cricket grounds of the world.

We decided we will not leave our spot and if they really want, they can send some uniformed security and escort us back to the stands or kick us out of the ground, and we will then make a huge fuss about it. Luckily for Mr. Mohammed of QPCC, he decided not to push the issue any further. Well, if he isn’t going to follow up with the “ICC rules”, why bother in the first place?

I stuck around after play talking to the locals. Apparently some of them were waiting to get tickets from the WI players for the next day’s play, which is a wonderful gesture from the players. Darren Bravo, local Trinidadian, stopped by and talked to them all a fair bit and I decided to muster up enough courage to walk up to him and ask for an autograph, which he happily obliged. Not too bad, isn’t it – starting off with the possibility of meeting Brian Lara and ending with an autograph of his clone?