Whose blame is it anyway?

Posted on April 9, 2012 by thecricketcouch

In a podcast interview I conducted with cricket writer Gideon Haigh, while talking about the use of technology in making umpiring decisions and the Decision Review System (DRS), he mentioned an event from the 2012 Ryobi Cup final, between South Australia and Tasmania.

There was ridiculous situation at the One Day final, the Ryobi Cup, where apparently the rule from Cricket Australia was that only use of the third umpire in domestic game was to be in the event of howlers. That had been the case right throughout the tournament. But, in the final, George Bailey [of Tasmania], towards the end of his innings was given not-out by the on-field umpire and the South Australian players picked up such a fuss that the umpire forgot what they were doing and referred it to the third umpire who over-turned the decision. That just simply shouldn’t happen. But, it’s a fact that the technology exists, is going to encourage the people to seek it out. 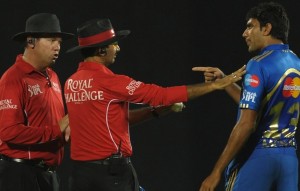 Munaf Patel, along with Harbhajan Singh, must be penalized for this behavior

On Monday, April 9, 2012 during the match between the Deccan Chargers and Mumbai Indians, off the third ball of the 13th over of the Deccan Chargers innings delivered by Munaf Patel, the ball went off the inside edge of Kumar Sangakkara’s bat. The bails were dislodged. It was not immediately clear whether the ball ricocheted off the pads of the wicket keeper Dinesh Karthik and then dislodged the bails or Sangakkara was bowled before the ball ricocheted off Karthik’s pads and then hit the stumps again. The square leg umpire, Johan Cloete, believed it was the latter and declared the batsman not out and can be heard on TV saying “Off the [wicket keeper’s] pads” to the straight umpire Anil Chowdhury. Rohit Sharma, the point fielder (and positioned diametrically opposite to Cloete’s position at square leg) can be seen making the “rectangle” sign, asking Cloete to check with the third umpire but Cloete was confident. Patel wasn’t confident in his initial appeal either. Neither was the wicket keeper.

Then, the replay was shown. It looked absolutely certain that the bails were dislodged before the ball ricocheted off Karthik’s pads to hit the stumps again. Harbhajan Singh, Captain of Mumbai Indians, and the bowler Munaf Patel, can now be seen arguing, quite demonstratively I might add, with umpire Cloete as to why he would not refer it to the third umpire and get a second look. Cloete was adamant about what he had seen (wrongly, as it turned out) and the ugly scene continued for another minute or so. Eventually, the on-field umpires decided to refer it to the third umpire and Sangakkara was declared out. To his credit, Sangakkara did not make a huge issue of it as he walked off the field, as he truly had been dismissed.

Dermott Reeve, the commentator on air at that time, along with Craig McMillan, said, “Umpires are allowed to make mistakes. That’s the human nature of the game. You cannot force the umpires refer their decisions. You cannot argue like this.”

In weekend club games, there are no video replays displayed on huge screens and no matter how egregious an umpire’s decision we as players may think it to be, we learn to move on. You believe that the umpire is doing the best job he can and you live with it.

However, the case here is slightly different. The sensible decision would have been for the umpires to refer it to the third umpire to adjudicate on the decision. We have come to see from umpires that almost all the run out appeals go to the third umpire as the on-field umpires want to err on the side of caution. It was interesting to see that Johan Cloete decided that there was no doubt in his mind that the bails were dislodged off the ricochet, although the possibility of him being wrong existed quite obviously.

There is plenty of blame to go around. Once the on-field umpires after a brief consultation with each other, had concluded that it was not out, the game needed to move on. But the Mumbai players, led by their captain, who felt hard done by the decision, created a fuss, especially after the replay had been shown on the screen. Are the players, in essence, wrong in asking for the right decision to be made? Should they have prolonged the argument as much as they did?

Should umpire Cloete have referred the decision to the third umpire as soon as the replay was shown on the big screen? Certainly, it would have been a tremendous loss of face for him, but umpires more experienced in the international arena have set precedence for him. During the 1st test of India-England series in 2007, umpire Simon Taufel wrongly gave Kevin Pietersen out when the catch was not clean – the ball had bounced just before getting to wicket keeper Dhoni – but recalled Pietersen to bat on after he saw the replay on the big screen.

If Cloete had gone for the referral as soon as the replay was shown on the screen, the escalation of the incident could have been easily avoided. The players, some of them unsatisfied, were getting back to their positions after the initial clarification by Cloete. It was after the replay was shown on the screen that they confronted Cloete more menacingly and aggressively. Most certainly, Harbhajan Singh and Munaf Patel should be penalized, to the full extent allowed under breach of conduct, for their tactless behavior but Cloete could have completely defused the situation. Ricky Ponting was fined 40% of his match fees for visibly remonstrating with a decision taken by umpire Aleem Dar in 2010-11 Ashes. By the same token, Singh and Patel must be penalized as well.

Here is another interesting aspect of this situation. International players have been given the right to challenge an umpire’s decision through the Decision Review System, in tests and ODIs. The players have been granted a mechanism to address situations where they feel hard done by an umpiring mistake. It is now only natural, as Haigh pointed out in the podcast, that the players would look for ways to swing the system their way. If indeed the ball had broken the stumps off the ricochet but Sangakkara were given wrongly out, it is possible that he would have felt hard done but the umpires needed to recall him once they had seen the replay, as that would have been the right thing to do.

Umpires do make mistakes. They are human, after all. Therefore, it makes sense to have the technological tools like video replay and others in place to aid the umpire in making the right decisions. However, this is not to say that technology has to replace the umpires, which is what the arguments about DRS system have skewed to become. Technology can come to the aid of the umpire in situations like the one that transpired in Mumbai. It was an incident too close to call but the umpire decided to anyway. However, when the replay showed that there was an obvious mistake in the umpire’s decision, it needed to be rectified. This is a template for the DRS system that I can truly get behind as well.

The DRS was initially said to be instituted and in place to get rid of “howlers” but it has come to dealing exclusively in the margins of decision making, such as borderline LBW decisions. The blog “A Cricketing View” has dealt on this issue in far greater depth, and makes the distinction between umpiring mistakes and errors. The decision taken today by Cloete was a mistake, as on a second look, and in all likelihood, Cloete would have changed his decision (as it so happened).

The authority of the umpire on the field has progressively been eroding. The statement “umpire’s decision is final” no longer is true in international matches as that convention has been usurped by the DRS. The fall out from that is now being seen even in matches where the DRS system is not in use. This is further compounded by replays on giant screens in stadiums that expose the umpires to second-guessing and persecution.

This has put the modern umpires in an impossible position. As it is, the umpire has become obsolete, LBW wise. It is for cricket (and by that, ICC) to decide what the role of an on-field umpire is in the future. The way cricket, the inclusion of technology in decision-making (rather than, strictly as a helping aid) and the erosion of umpire’s authority on the field has been progressing, soon the umpires will be reduced to just bean counting figureheads.