Posted on February 22, 2012 by thecricketcouch

In Baseball, the batter gets a hit and gets on base. While on base, he is allowed to get a lead off the base as the pitcher winds up and makes a pitch at the batter on home plate. The base runner on first base (or second or third) attempts to get to the subsequent base without having the need of the batter at home plate to get a hit or make a ground out to advance to the next base. When the base runner attempts to advance or lead off from one base to another without the ball being batted and then is tagged out by a fielder while making the attempt, he is declared out “caught stealing”.

There are a couple of reasons why a base runner might attempt to steal a base. If the base runner can advance from first base to the second without a hit from the batter at home plate, he has put himself in a scoring position and can come home on a hit that goes out of the infield. Hits are hard to come by as Baseball is predicated on the fact the batters fail more often than not, to get a hit. Roughly, a batter that gets a hit every third time he steps to the home plate is considered to be performing superbly. Another reason is that it breaks the rhythm of the pitcher on the mound. Just by even pretending to steal, the base runner will ensure the pitcher pays him attention by throwing to the first baseman. 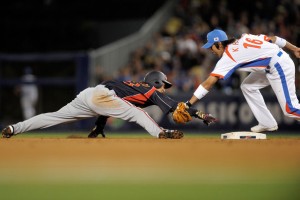 A pitcher will make throws to the first baseman occasionally (or as often as is required) to make sure the base runner does not get a big lead off the base. The pitcher is allowed to “pick off” the base runner or if the base runner had already made his move towards the second base, the pitcher can throw to the second baseman (or first baseman) and get the runner in a “run down”. These are allowed as long as the pitcher has not made a move decidedly towards the home plate, with the intention of delivering the pitch. If he has, then, if the catcher catches the ball, can throw to second base and get the runner out, “caught stealing”, provided the batter at home plate has not made contact with the ball.

When the base runner is tagged at second base, the umpire calls the runner out and the runner makes his way to the dug out. It is one of the ways of “making an out” or if you will, “mode of dismissal”. It is in the rules of the game. The umpires do not ask the fielding team’s captain whether he wants to persist with the appeal. There is no emotional guilt, perceived or otherwise, associated with it. A player is out according to the rules of the game and hence has to make his way out of the field.

Similarly, in Cricket, Law 42(15)* states “The bowler is permitted, before entering his delivery stride, to attempt to run out the non-striker.” This law is in place to prevent unfair play by the non-striker. There was a time when this law was banished but was brought back in to the sport during the ICC Conference in Hong Kong, in 2011.  Once the fielder has appealed, after effecting the run out, it is the job of the umpire to enforce the law of the sport. The umpire need not and more importantly should not, put the burden of emotional guilt on the fielding team’s captain by asking him whether he really wants to appeal.

This exactly was what transpired at Brisbane during Match 9 of the Commonwealth Bank Series between India and Sri Lanka. The incident can be seen in the video below. As R Ashwin ran out the over eager Thirimanne, backing up too far, he appealed to the Umpire (Paul Reiffel) and walked away towards his captain (Sehwag). Umpire Reiffel instead of declaring the batsman out (according to the law), had a discussion with the other on-field umpire Billy Bowden, who then had a discussion with Sehwag. In the mean time, Sachin Tendulkar seemed to give his input to Sehwag and they withdrew the appeal.

This is ridiculous on many levels. The non-striker Thirimanne was trying to gain an advantage by unfairly backing up. However, as soon as Ashwin had taken the bails off and appealed to the umpire, the umpire needed to enforce the laws of the game. Once Thirimanne had indulged in an unfair practice, in my point of view, he does not deserve a second chance. If his excuse was, if anything, he did not know of the change in the law, I do not see why ignorance should be rewarded. Secondly, Umpire Reiffel needed to adjudicate based on the events that unfolded right in front of his eyes, rather than get in a discussion with Umpire Bowden. Was there any doubt in Umpire Reiffel’s mind as to what had transpired in front of him? It was all very plain to see. I do not see any reason why Reiffel would have had any doubts, which would have led him to discuss it with Bowden. If indeed Reiffel had doubts of what he had to do, that actually makes him an incompetent umpire. To top it all off, Sehwag’s reasoning as to why he withdrew the appeal, as he mentioned it in the post-match press conference was, “because if we appealed and umpire gave him out, then somebody will criticise that, you know, that was not spirit of the game.”

How is then, what Thirimanne was doing in the spirit of the game? Sehwag has actually gone on and rewarded a player who was shortchanging the opponent by playing unfairly, while pussyfooting around the situation. Just so you know, Thirimanne continued to back up after this incident for bowlers other than Ashwin.

Michael Jeh, writing on ESPNCricinfo commends the gesture, “cool-headed wisdom [of Sehwag and Tendulkar], coupled with sensible umpiring, avoided creating an incident that would inevitably have polarised two close neighbours and would almost certainly have led to bad blood that would have lingered on for some time.” Really Michael? How long did the bad blood from when Randiv bowled a no ball to prevent Sehwag from getting a century last?

If the “Spirit of Cricket” is going to be invoked as and when it is convenient, why even bother to have laws of the game for specific situations? Why bother having officials who are entrusted with the responsibility of enforcing the laws of the game? It has become acceptable for players to appeal for catches even when they know for a fact the batsman has not edged it. Bowlers appeal for LBWs when it is plain to see the batsman has got an inside edge. How can these practices be reconciled with the Spirit of Cricket? Sachin Tendulkar, who played the mediator here and convinced Sehwag to withdraw the appeal, almost never walks.

Baseball has this vagueness and the gray area of morality covered pretty well. The umpires do their jobs with out forcing the players to make decisions based on supposed guilt, and the players do theirs. It is about time Cricket sheds its cloak of morality. It is just a convenient place for those that are playing the game unfairly to hide in.
—-
* – Update: The MCC Law 42(15) has been replaced by ICC’s Standard One Day International Match Playing Conditions 42(11) (Page 29 of the document) which is shown below.