Posted on December 29, 2011 by thecricketcouch

That is the score line for the two Victorians, Peter Siddle and James Pattinson, in the first test between India and Australia at the home of Cricket Victoria. It was quite plain to see the effect the two homeboys had on Australia going 1-0 up in the four tests series. 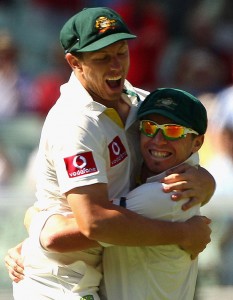 When India had the chance to grab the match by the scruff of its neck on the first two days of the test match, Peter Siddle proved to be the stumbling block. First, he forged a thoroughly frustrating 72 runs stand with Brad Haddin in the first innings – more importantly playing out more than 16 overs in the process, 99 deliveries to be precise. Secondly, when India were on course to a truly dominant and possibly a match winning first innings total with Sachin Tendulkar batting like a dream, Siddle produced the most vital breakthrough in the context of the game by bowling Tendulkar in the last over of the second day, with India on 214. There is a symmetry to that score 214.  Australia was 214/6 when the dour debutant Ed Cowan was removed and Siddle had walked in to bat, in the first innings.

The post tea session on Day 2 saw some of the most hostile, interrogative fast bowling this side of Dale Steyn in Cape Town, almost 12 months ago. Siddle, like the current Australian bowling coach Craig McDermott, has that permanent “Don’t fuck with me” scowl. Only thing grumpier than Siddle is a pissed off Siddle. Denied of Rahul Dravid’s wicket as he had overstepped, Siddle kicked things to a higher gear and put on a show that the fans – Indians and Australians alike – could tell their grandchildren that they were there to witness it. The next delivery cut Dravid in half and landed a body blow, quite literally. It was mesmerizing to watch the course of play develop with two top-flight batsmen countering a reverse swinging ball delivered at 150 kmph as stumps were drawing near.

However, long before Siddle got his angry bulldog on, Pattinson was troubling the Indian top order. Belying his age and young career, Pattinson was on Sehwag’s case early in the innings and backed it up with exquisite fast bowling. Plenty of play-and-misses, edgy shots, nervous footwork all caused by sustained high quality fast bowling by a young man who showed glimpses of a great cricketing career.

Australia can happily look to their future based on the maturity and temperament with which some of their new test entrants have made their early marks. Pattinson displaying the nous of a top order batsman coolly collected 55 runs off 135 balls without being dismissed in the match.

This test witnessed six fast bowlers – from both sides – performing exceeding well and it was a shame that one set of them went home empty handed as their team’s famed batting line up, standing at the threshold of history, did not grasp the opportunity. Two batting collapses later India can only look back and wonder what could have if only Sachin Tendulkar had survived till stumps on Day 2. Dropped catches, missed runouts and inexplicable field placements did hurt India’s cause but the blame for this defeat should rest squarely on the shoulders of their batsmen. It is a quick turnaround to the 2nd test at Sydney and it is quite probable that India will play the same 11 and so, their batsmen better rediscover their touch and form or this series will bring back the harsh memories of the England tour from earlier this year.

As an India fan, I was sure disappointed at the result but for three days, it was an even contest featuring brilliant fast bowling, survival mode batting, plenty of drama and wickets, and a very special Tendulkar innings all set in a magnificent coliseum watched by more than 189,000 raucous fans. There were positives to take from this match for India and all of it had to do with the three fast bowlers: Zaheer Khan and Ishant Sharma’s health and Umesh Yadav’s form.

The test match perhaps deserved a lot better than the tame end it got but the body blows by Siddle (Tendulkar’s wicket twice) and Pattinson put paid to those expectations. It was rather fitting that Australia, reeling from the defeat to their trans-Tasman rival at Hobart, needed a “pick me up” at Melbourne, and it was the two Victorians who stood up and answered the call.