Posted on October 12, 2011 by thecricketcouch

There is a running theme in the autobiography of the fastest bowler in the recorded history of cricket. He is a cocky, self-assured man who tried to prove the doubters wrong and made sure they knew about it. The book is littered with instances where he called up someone or showed up at their door hurling abuses to let them know they were wrong in doubting him. 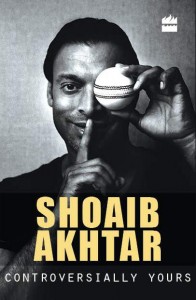 Rising from a very poor background in Rawalpindi, the story of Shoaib Akhtar with dreams of stardom, flashy cars, fancy clothes and women is quite enthralling. The mischief and the brash attitude to not take a backward step and being constantly in someone else’s face did not win him many friends but explains the outlook to his bowling on the field.  The Shoaib Akhtar that comes through in the book does not deal in the grey area; it is all black and white. If you wronged him, there was nowhere to hide. When he moved to Agricultural Development Bank of Pakistan (ADBP) domestic team from Pakistan International Airlines (PIA) team who did not treat him right, he let their batsmen know by hitting and bruising a few of them. He had to settle the scores.

At the same time, if someone looked out for him, he goes out of his way in showing his gratitude. The story of a young Akhtar spending a night with a Tongawallah on the streets of Lahore (he did not have the money to get a hotel and food) on the eve of PIA cricket trials whom he later sought out when he became the fast bowling sensation of not only his country but the world over is quite heartwarming.

Any discussion of Pakistani cricket is incomplete without talk on the dressing room drama and the backroom politics of the Pakistan Cricket Board (PCB), and there is plenty of it in the book. Right from his Pakistan debut in 1997 (which almost did not happen as Wasim Akram apparently was hell-bent on not letting Akhtar play under him) to the last days of his international cricket during the World Cup 2011 (where he warmed the benches), there are no shortages of the drama we have sadly come to expect from the Pakistan team.

Akhtar doesn’t mince any words when talking about the ineptitude and general callousness of most of the PCB officials. He feels done in by them and their politicking, including the “twisted” reports of him having warts. He is effusive in his gratitude for those that helped him get through the “chucking” saga as well as the doping. There are several comparisons of the remuneration that the Pakistani players get to those from across the border and is bitter that Pakistani cricketers never received sufficient compensation for their blood and sweat.

There are of course some parts that have been blown out of proportion and beaten to death. Those may not be all spot on but these are his opinions and he is entitled to them. Sachin Tendulkar and Rahul Dravid not being match winners and his opinion that he had the measure of Tendulkar; He doesn’t think much of Javed Miandad as a coach and thinks Waqar Younis was hypocritical in his advice to the players, as he never followed those as a player what he preached as a coach; Afridi was cozy with the Karachi media and leaked stories; Akhtar was not a big fan of Inzamam’s religious practices being forced on to the players and never got along with him; Ball tampering (yes, he did indulge in it from time to time) is fair according to Akhtar as the odds are stacked against the fast bowlers especially in the subcontinent. He apologizes for some of the mistakes he made including hitting Mohammad Asif with a bat in 2007.

This is a story of a man who dreamed of making it big and punished his body to get there. He is a bit bitter that he did not receive the kind of acknowledgement that he thought he had earned and deserved. The book is a must read for those trying to understand what made Shoaib Akhtar – one of the greatest fast bowlers – tick in his injury filled, controversial career that promised so much more. “I have often tried to explain to my family and friends why I felt this need to run, that it was both self-expression and an experience of complete freedom. When I ran, I felt free.”