On injuries and player toughness

Posted on September 27, 2011 by thecricketcouch

When a player returns to the field of play after being forced to leave with an injury, he is generally called “gutsy”, “tough”, “brave” amongst other such adjectives. The history of cricket is littered with several such acts: Anil Kumble coming on to bowl 14 overs in a drawn drab match where only two innings were completed with his head swathed in bandages holding together the jaw that was broken by Mervyn Dillon; Malcolm Marshall taking 7-53 with his thumb on the non-bowling hand broken, covered in plaster and trying to bat one-handed; Graeme Smith came in to bat with a broken hand and an injured elbow in hopes of saving a test in 2009. 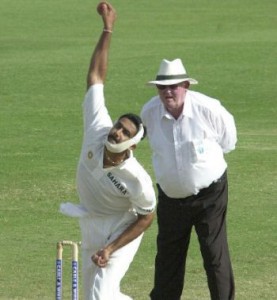 There is a fair bit of romanticism of such displays by fans and writers alike. Peter English called Smith “the bravest in cricket”, Suresh Menon describe the sight of bandaged Kumble bowling, “most inspiring” and Vivian Richards called it “one of the bravest things I’ve seen on the field of play” and he played alongside Marshall and his plastered left hand!

Yet, a Gautam Gambhir, woozy and vomiting, who tried to bat through with double vision from a concussion, in the fourth test at The Oval barely gets a mention for putting his health in the cross hairs. Is it because that his act of courage to come out to bat was in a series that was long lost? Does it make it okay be undervalued? Or, is it because the injury to Gambhir was neurological and there were no bandages and plasters to show the world that he was indeed hurting? Was Gambhir’s act any less tough than Kumble’s? 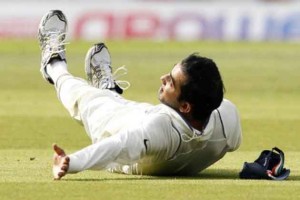 Don’t get me wrong. It does take a lot to come out bowling when every step that you take on your run up, you are basically jarring the jaw held in place by several layers of gauze and cotton. It is a case of mind over matter. So it was in the case of Smith and Marshall. Except in Gambhir’s case, he couldn’t even do that. That mind he was trying to focus to get himself going was severely traumatized and he couldn’t even sight the ball.

If I looked down, I felt like puking. If I tried to focus on one object, that made me feel dizzy. The vision remained blurry. If your vision is blurry, if you can’t focus on one object, if you can’t judge the pace of the ball or its trajectory, not only are you putting yourself at risk, you are also letting your team and your country down. During the [Oval] Test I did what I had to do. There was no choice but to bat, but after that, even when taking throwdowns, I struggled with the vision.

Of course, Twitter was flooded with people providing unsolicited advice to Gambhir “to suck it up” and “grow a pair” and come out to bat. When Gambhir eventually batted in the first innings, his running between the wickets was obviously slow. He was trying not to jar his brain any further by running hard. An Indian journalist was quick to point out in his report that “his [Gambhir’s] problems are hurting India even more.” Seriously?

According to Scientific American, “a concussion is an immediate but reversible traumatic paralysis of the nervous function of the brain. More so than the immediate impact (primary injury), however, a concussion involves a host of effects (secondary injuries) that emerge several hours or days after the trauma… are frequently the origin of significant long-term effects, including brain damage, cognitive deficits, psychosocial/behavioral/emotional changes…”. Mayo Clinic suggests that “No one should return to play or vigorous activity while signs or symptoms of a concussion are present”.

A broken jaw will heal – in time. So do the broken fingers. Even if they don’t go back to their original form, it does not ruin a player’s career or his life after cricket. If a brain injury was not sufficiently cared for, it may not only ruin the player’s career but also his life well after it.

In the recent years, the NFL has moved towards protecting his players from concussions by instituting new rules to prevent hits that may lead to concussions. In the earlier days, when a player got concussed, I remember hearing the commentator (usually a former player) saying, “Oh, he just had his bell rung but he should okay if he sits out a few plays”. According to a study, more than 61% of former NFL players had concussions in their playing days. Nowadays, such callous approach to a severe trauma has been replaced with more careful observations, precautionary measures that do not allow a player to return in the same game– and significantly – independent medical evaluations by doctors not associated with the team that may have vested interests in the player returning back to field of play, sooner than later.

Cricket is not as violent a sport as NFL Football is (in fact, far from it) and therefore, it obviously does not have the high rate of occurrence of concussions and head trauma either. I am not trying to make this in to a contest of “who is tougher?” but since we, as cricket fans, are not exposed to it and do not see the effect of the injury outwardly, may lean towards undervaluing the courage of a player putting his career – and life – in jeopardy.

More importantly, is it worth it? We don’t need another Raman Lamba.