Pitch it up Bhajji

The pitch at Sabina Park, Jamaica started taking tremendous amount of spin on Day 1 of the first test between India and West Indies. When West Indies came in to bat after bowling out India for 246 in the 1st innings, all the excitement was about how well the WI batsmen were going to cope with the Indian spinning duo of Harbhajan Singh and Amit Mishra – especially considering the fact Mishra had the WI batsmen all bamboozled in the ODI series.

During the pitch report before start of play on Day 2, Jeff Dujon indicated that the Indian spinners would be the ones causing a lot of trouble to the WI batsmen. It turned out that Praveen Kumar and Ishant Sharma did bulk of the damage (6 wickets between them). Mishra took 2 tail-enders while Harbhajan took out Chanderpaul for the first time in his career and Carlton Baugh.

With the West Indies set a very tough 326 runs target to chase on a 3rd day pitch, they got off to a rousing start and Dhoni turned to his spinners to bring some semblance of control. Even on a devilishly turning pitch, a spinner has to do his basics right: Length and Line. You pitch it short, the batsman has enough time to adjust to the length, rock back and cut or pull. You bowl too straight, the turn is going to take the ball down leg (if you are an off-spinner). And of course, if it is too wide, you might as well send it down with a “hit me” sign on it. The ideal length would be (for an offie anyway) the one that invites the drive which could lead to bat-pad catches or go through the gate, or edges to slip. In the 33 overs so far bowled in the WI 2nd innings, the Indian spinners (including the part time work of Raina) have figures of 16-2-51-0, with Mishra accounting for the worst returns: 4-0-23-0.

Comparing the two offies (Harbhajan and Raina), Suresh was more economical (6 overs for 9 runs) and even looked more threatening than Harbhajan (6 overs for 19 runs). The pitch maps of the two bowlers, in the 2nd innings, may hold some clues to their respective performances.

Harbhajan was hit for four boundaries in the 6 overs he bowled, all of them at the two left handers, old nemesis Chanderpaul and Darren Bravo. Three cut through the offside and one swept from middle-and-leg. Raina gave away one boundary, a cut through cover. 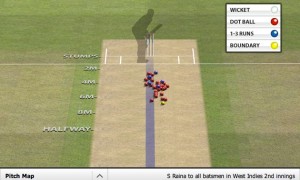 Harbhajan’s pitch map gives the indication that he had a tighter grouping than Raina but he bowled more balls that were short and wide, and were punished. Raina had more deliveries, bowled to the left handers, starting at the stumps and turning away.

Harbhajan had barely 3 deliveries bowled in the 2-4m zone where as Raina had 6, and looked more dangerous. Whenever Harbhajan pitched it up to the batsman and let the pitch do the rest of the work for him, he looked brilliant. But that was attempted very rarely. There was one particular delivery, that pitched on middle and broke away from Bravo, which should have indicated to Harbhajan to start a bit more straight at the batsmen. However, only 6 of his 36 deliveries bowled today landed on the “pitch map” between wickets. (Raina – 11 out of 36).

For someone that has been around for close to 13 years in the circuit, and is “the lead spinner” of the team, that was a terrible effort, especially compared to the effort of the part-timer. Harbhajan needs to get his lines AND lengths right for India to walk away from this match with a win and not waste the masterful effort by Dravid. 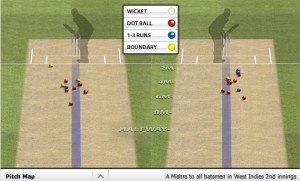 Oh, in case you were wondering about the other spinner in the squad, let’s just say he is not going to be threatening Harbhajan for a spot in the next test. Mishra should be worried about his effort and if he doesn’t get it together tomorrow as well, we will be seeing Pragyan Ojha soon.