If you were a fan of a cricket team other than the Aussie teams of the nineties and the early oughts, you know the feeling — Your team makes early inroads in to the strong Aussie batting lineup including greats like Ponting, Hayden and others and you are feeling quite good about yourself and your team. The Aussies are 5 or 6 down with next to nothing on board. You think you should be able to wrap them up soon and let your batsmen drive home the advantage.

But that is when you will have a pesky tail-ender like Jason Gillespie or a Shane Warne digging their heels in and provide solid support to the lone remaining recognized batsman. What looks like a boundary here, a boundary there immediately avalanches in to full fledged counter-assault and before you know it, the 7th or 8th wicket partnership has reached triple figures and you are left wondering what the hell just happened.

This is usually a characteristic of a champion team. They just do not know when they have been beaten. They just don’t quit. They back themselves to fight themselves out of the proverbial corner. Sure, they might lose sometimes, but they know they are not gonna die wondering. 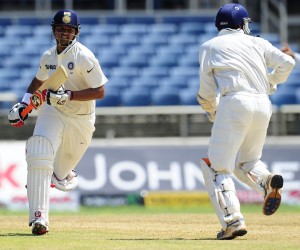 The 146 run partnership between Suresh Raina and Harbhajan Singh for the 7th wicket reminded me of the Aussie counterattacks. Before you crucify me for even comparing this Indian team to the Great Aussie teams of the past 2 decades, I just said “it reminded me”.

At 85/6, with three of your most experienced batsmen that were expected to guide this Indian team missing Tendulkar, Sehwag and Gambhir, Indian fans that lived through the 90’s would’ve expected the team to fold up well short of 150. Generally, that would’ve been the time when the Gavaskars of the world trotted out stuff like “He has a first class century for his state Ranji team” and “he is no mug with the bat”. Instead, Harbhajan came out positive which quickly rubbed off on the last “recognized” batsman (playing his 8th test) and they quickly rattled off the boundaries and made Darren Sammy take the foot off the pedal and spread the field. If not for a brilliant catch by Bishoo, India may have ended up with a far larger score than their eventual 246.

Sure. 246 is not 400 (duh!) but is certainly a respectable score on a challenging pitch that is turning square already on Day 1.

We have seen several such fightbacks from this Indian team in the last 3-4 years. Even the World Cup final in Mumbai attests to that. Perth ’08 after the Sydney debacle is another instance when the team got together and proved an invaluable point. After the innings defeat in Centurion in the recent SA test series, the Indian team fought back to even the series 1-1 on a tough pitch in Durban. The Australia tour of India in 2008 had several instances that provided ample evidence of the steely backbone to this Indian team.

It has been said that this Indian team is a slow starter in a series and to an extent, it is not too off the mark.  Since October 1, 2008, India hasn’t lost a test series and at home, have won all except for one which they drew 1-1 (versus SA), on the way to becoming the top ranked test team in the world. Another evidence of their ability to fight back.

Certainly this Indian squad does not have bowlers of the caliber of a McGrath or a Warne, but under helpful conditions, their bowling attack (when fit and able) led by Zaheer Khan is nothing to be sneezed at, in relation to the other current test teams. Perhaps this could be the only reason that might prevent this team from becoming as dominant as those Aussie teams (and a small case of one of the best middle orders of the modern game retiring soon) but there is no “quit” in this team and has been an absolute pleasure watching them over the years.

But champions are celebrated by how they close out the games and not necessarily how they begin. Michael Jordan is lauded as the best to have played Basketball especially for his ability to come through when it counts. Even Dirk Nowitzki was shooting 6 for 23 till he got hot, hit 3 clutch baskets and closed out the Game 6 of the recent NBA finals.

P.S. I apologize for not having written here for a while now but had some trouble with the site set up, and was focused on other endeavors, but I am back. In addition to blog posts, this site will also feature podcasts (“Couch Talk”), Videos (“ccTV”),  Cartoons, Claymation among other things. Please update your bookmark the site, add it to your blogroll and all the good stuff. It’s good to be back.