Posted on July 4, 2016 by thecricketcouch

BBC Sport, in the cricket section of its website where the headlines are collated, reported on the three wicket haul of Pakistan pacer Mohammad Amir in the warm-up game vs. Somerset, with the headline “Spot-fixer Amir takes three wickets on return“. The headline of the piece itself, when clicked from the cricket section, reads as “Pakistan v Somerset: Mohammad Amir takes three wickets on return“, and the report itself begins with, “Convicted spot-fixer Mohammad Amir marked his return to first-class cricket in England after a five-year ban with three Somerset wickets.”

Obviously, it is a fact that Mohammad Amir was convicted for spot-fixing during Pakistan’s tour of England in 2010. He served his jail sentence for it, and was banned from Cricket and now, having served his time for the crime, is on the mend.

What BBC Sport cannot be accused of is misreporting the facts. They are absolutely factual when they ran the headline “Spot-fixer Amir takes three wickets on return”. Amir spot-fixed, and on his first class return in England, he has taken three wickets. However, what BCC Sport are guilty of is hypocrisy, and possible bias.

On the same cricket section of their site, to the right of the Amir story, is a link to a BBC Radio 5 Live podcast with host “Tuffers and Vaughan” who are joined by BBC’s chief sports writer Tom Fordyce, for a “Chris Gayle special”. When clicked on the link, it opens the iplayer where the title of the podcast is “Chris Gayle “Universe Boss” special”.

If you have been following any amount of cricket in the last few months, it must be plain to see the hypocrisy or at the very least, the economy of facts that BBC Sport has used here to highlight two different cricket storylines and two different cricketers. If you weren’t living under a rock, it would have been impossible for you as a cricket follower to avoid the uncomfortable sideline exchange Gayle had with Aussie reporter Mel McLaughlin, as well as the overtures he reportedly made to Times reporter Charlotte Edwardes. It is impossible for me to come to any other conclusion – a reasonable one at that – that Gayle is sexist and misogynist, and at the very least, he sexually harasses female reporters that are just doing their jobs.

While Amir is – correctly – identified as a spot fixer, Gayle’s repeated sexist and misogynic behavior hasn’t convinced the writers at BBC Sport to at least indicate in the headline for the podcast as “Tuffers and Vaughan – Serial sexual harasser Chris Gayle special”.

Now, it makes me wonder why BBC Sport would handle these two players differently. While Gayle’s behavior has been despicable, he is still viewed as a fun loving guy (the choice of the moniker Universe Boss tells us that) and society manages to look past a male athlete’s sexual transgressions as just another case of boys being boys. So what he was being obnoxious to couple of women hacks? It’s not a crime really is it? Where as Amir bowled a no ball to order! That robbed the sport of its integrity!!!

But then, as pointed by Tim Young on Twitter (see below), BBC Sport didn’t find it necessary to headline the report on the qualification of American sprinter Justin Gatlin to the Rio Olympic Games as “Two  times drug cheat Gatlin qualifies for Rio with year’s best times”.

Why the differing headlines? pic.twitter.com/DrHEkvjyjK

It is obviously a fact that Justin Gatlin was banned twice for doping and yet BBC Sport did not make a mention of it in the headline or in the report itself, and that, is textbook hypocrisy. 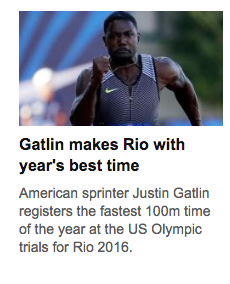 There could be any number of reasons for BBC Sport headlining Amir’s story the way they did: that they link controversy to the Pakistani cricket team any time they tour England (reverse swing, ball tampering allegations, spot fixing etc.) or that they view Amir’s crime as more serious than that of others, or it could be just an attempt to “wind up” Pakistani fans to get some cheap clicks. But what is beyond doubt is that even BBC, a venerable news institution can be selective with their facts, and by extension, hypocritical.

And, they need to be called out on it, and plenty of fans have already done so on social media. It would be refreshing and affirming if journalists and journalistic institutions would also join them, and call out BBC Sport on their obvious hypocrisy. Because, words matter.