Posted on March 3, 2016 by thecricketcouch

Is it nature or is it nurture? This has been one of the long standing debates in psychology relating to the extent of certain aspects of behavior being a product of either inherited or acquired characteristics. More than a century ago, John B. Watson of Johns Hopkins University conducted experiments – popularly known as the “Little Albert Experiment”, [Do read this Wiki link] and provided empirical evidence of classical behavioral conditioning that leant support to the idea of nurture having the major role in determining personal characteristics. Of course, there are the Pavlovian experiments that provide credence to the idea of behavioral conditioning as well. Several psychologists have criticized these theories for being one-dimensional and have noted that it does not account for other types of learning, especially learning that occurs without the use of reinforcement and punishment.

I was thinking about these in regards to batting in cricket: “Are we a product of our environment?” It has been conventional wisdom that subcontinental batsmen are good players of spin, are adept at using their feet to reach the ball and make full use of their supple wrists developed through a system of playing the spinning ball late and maneuvering it in to the gaps in the field to accumulate runs. The other side of this piece of wisdom is that subcontinental batsmen would struggle playing on fast and bouncy pitches when they travel abroad to Australia, South Africa etc. The reverse has been applied to batsmen from there as well, that they can handle the bouncing ball but struggle against spin.

Are these theories absolute? Most definitely not. We have seen subcontinental batsmen pile on the runs in conditions that are supposed to be alien to them and Aussie and Saffa batsmen register massive scores on turning tracks. With every passing year, we are observing batsmen perform feats that shred existing conventions. (Although playing on seaming pitches is still an issue, whether the batsman is from the subcontinent or somewhere else).

I used to open the batting for my House team (“Krishna”) in high school. Not because I was a good batsman or anything. To this day, my highest score in any form of cricket is 49. My batting has deteriorated so much that in the last 10-12 years, if I was sent in at 10 by my club side, I considered it a surprising promotion. My school side allowed me to open because I had a decent defensive technique, and I was able to deny the opposition early wickets from one end. That’s pretty much it.

Then I look back at my formative years of playing cricket in the backyard with my brothers. I had blogged about it too after I took my wife to India to show the places I grew up in.

My brothers and I would play in the cramped, narrow backyard. I’m reproducing the rules of our game from the prior post: “My eldest brother would chuck the cork ball from the far end and there were 2 fielders not too far from the bat (at silly point and forward short leg) and one at backward short leg and another at short mid on. The idea was not to make runs but survive for as long as you can. If you get caught, or bowled, or beaten three times in a row, or hit on the leg twice, or the ball hits the wall without bouncing on the ground, you are out.”

Since getting the batsman bowled was rare, getting them out caught close was the way to go, and hence the balls would be bowled just back of good length so that they bounce high enough for them to be popped up. To counter that, I generally went on the back foot, played with soft hands and dropped them down as close as possible to my feet. Since survival was the goal, I did everything I could to drop the ball to the ground right away. 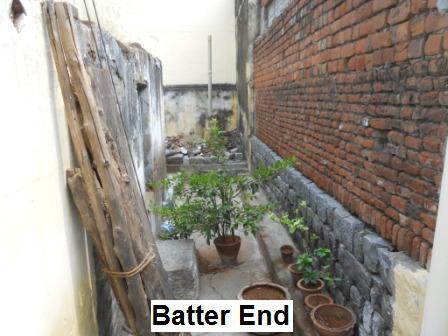 Backyard where my batting was conditioned out of me

This I have carried with me since. I can still defend and survive but playing the ball on its merit almost never entered my conscience. I suppose my batting method is entirely a proof of classical behavioral conditioning. If I didn’t defend the way I did, I would be punished with being dismissed and had to wait a long time to get another turn. The “nature” side of batting never really happened for me, being not blessed with the reflexes and analytical ability to chose the shots to play.

After the experiments were completed on Little Albert, Watson apparently did not have the time to desensitize him from the conditioned fears, and so it is assumed that those fears continued post-experimentally. I am glad that towards the end of my high school years, I began to bowl medium pace which has allowed me to play cricket and enjoy it to this day. In my U.S. University playing days, I bowled the inswinger which came naturally, but learned the outswinger as well so much so that it became my stock delivery. So, then, in some ways, I guess it is all a combination of both, nature and nurture.