Posted on January 31, 2016 by thecricketcouch 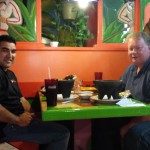 In this episode, Edward Fox, who is an Aussie that moved to the U.S. 24 years ago, and Archiwal, who took to cricket in the Afghan refugee camps in Pakistan, and now lives with Edward Fox through his work with the U.S. Army as a translator in Afghanistan talk about the cricketing story that has brought these two very different individuals together from different corners of the world to living under one roof in Wichita, Kansas.