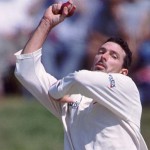 Former Australian bowler Damien Fleming talks about being a swing bowler and surviving and succeeding in the subcontinental conditions, his side-on bowling action inspired by Dennis Lillee, bowling in the death, the memorable final overs in 1996 World Cup semifinal and 1999 World Cup semifinal, bowling to Sachin Tendulkar in his peak, and his life after cricket amongst other things.