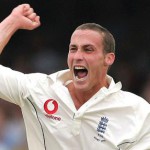 Former England fast bowler Simon Jones talks about his inspirations in becoming a fast bowler, his injury-curtailed Test career, the captaincy of Michael Vaughan and Nasser Hussain vis-a-vis Andrew Strauss and Alastair Cook, the influence of Duncan Fletcher’s coaching, and his dream dismissal of Michael Clarke in Ashes 2005, amongst other things.