It was a day of typical London weather; grey skies and misty rain. I was scheduled to meet Daniel Norcross, BBC Test Match Special and originally known for Test Match Sofa at the Oval cricket ground. Surrey were hosting Kent for a Division Two championship fixture and today was Day One of the four day match.

Play didn’t start well past 3 PM and lucky for me, I only missed the first few overs. Kent lost their second wicket just as I reached the stands. I met Daniel, and his friends, sat to the right of the pavilion enjoying a decent day of cricket with wine, samosas, cheese and other munchies.

There were about 100-150 people watching the match, and most of them sat in the members section in the ornate and impressive looking pavilion. I was wondering how was it possible that Dan’s friends could afford to be at the cricket on a Monday afternoon. As I was introduced to them, I recognized two of the names and realized how they could indeed be there. They were writers and musicians, and not ones to have a fixed schedule. The names I recognized were Jonathan Wilson and Nicholas Hogg, both of them established writers, and contributors to ESPNcricinfo’s Cordon (and members of Authors CC). 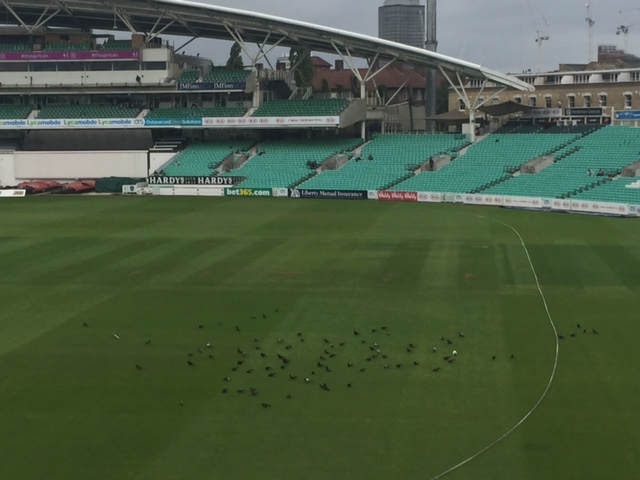 More pigeons on the outfield than people in the stands? 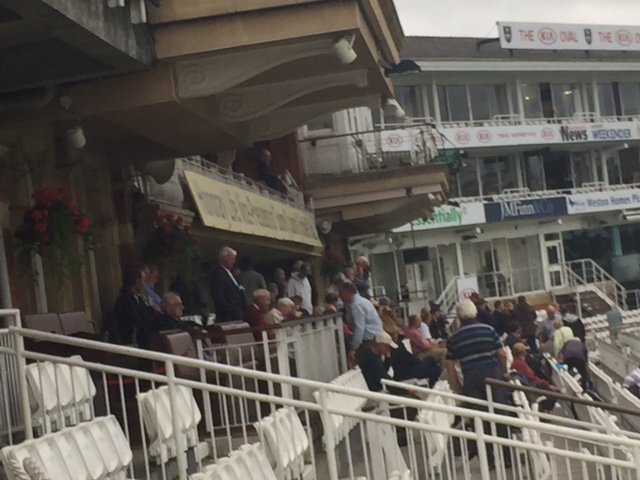 The floodlights were already on, and soon after the Tea break – they had to take it, obviously – they went off for bad light only to return 30 minutes later. Play was called soon after that with Kent losing their 4th wicket for just 132 runs. In all 30 overs of play was possible.

One other person I met in the group was David Waldstein, the sports reporter for NY Times, who was in London to cover Wimbledon. After a hesitant start, somebody asked about which Baseball team is doing well this year and soon, David and I were off talking about Baseball, and Football, and my hatred for all (sport) things Boston and he, a die-hard Bostonian. We reminisced about one of the greatest playoff series in Baseball, the 2001 World Series which the Arizona Diamondbacks won by beating the New York Yankees in the bottom of the 9th inning in Game 7. Arrgh, I still remember that moment so vividly and recollect the frustration in entirety.

We hung around for a bit after play had ended, shooting the breeze and soon parted ways. Some headed for a curry, and I headed home for Dosas.