What is Moeen Ali’s role in the England team, especially with the ball? With Joe Root, and if necessary Adam Lyth, available to bowl part-time spin, is Moeen picked to be a front line spinner? He did begin his Test career batting in the top 7, so, does that make him an allrounder? If so, is he a batting allrounder or a bowling allrounder?

He averages with the bat 28.50 (before the start of Ashes 2015) with one hundred and two fifties in 11 Tests (17 innings). Technically, an allrounder (especially in Tests) is someone who can claim a spot in the line up on the strength of either of their two main skills. No one would be open to pick a batsman who averages under 30, surely?

With the ball, in his first 11+ Tests, Moeen has taken 35 wickets at an average of 32.65 at a strike of 53.3 deliveries per wicket, with a lone 5-fer. Are those stats of a frontline spinner? Does he warrant a spot in the lineup just based on his ability to bowl offspin?

Now that England have pushed him down the batting order to 8, do they see him as a bowling allrounder? Were they wrong in initially thinking he could be a batting allrounder? 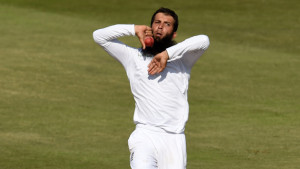 In 132 First-Class matches, his numbers indicate, if anything, he is a batting allrounder. His returns with the bat (7881 runs, Avg: 38, 14 100’s and 50 50’s) stack up better than with the ball (2096 overs, 18 wickets, Avg: 39.97, Econ: 3.48, S/R 68.7). Perhaps, these numbers convinced the England selectors to use him the middle order and bowl his tweakers. Since he entered the international scene as a middle order batsman who could bowl spin, he has been, in his brief career so far, seen as a part-time spinner. ESPNcricinfo’s George Dobell who has covered, observed and pondered about Moeen for quite sometime believes he is a “batting all rounder, with bowling skills and armory as developed as Graeme Swann’s at similar stages of their careers” and suggests that Moeen thinks of himself the same way as well.

Swann, who debuted at the ripe old age of 29, averaged 22 with the bat and no one confused him for an allrounder of any kind, really. He was a frontline spinner through and through. In 60 Tests, he bagged 255 wickets at an average of 29.96 and a strike rate of 60.1, while going at 2.98 runs per over. Swann has always been one for the dramatics, seemingly taking wickets in the first over of his spell every time. His flair, style, the theater he provided and his bowling skills and social media presence had endeared him to a lot of the fans and is remembered fondly. Moeen, by the virtue of being an offspinner, cannot avoid any comparisons with Swann if he was thought to be a frontline spinner. 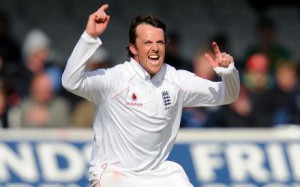 Sometimes, Moeen’s record as a spinner is rubbished because people believe that oppositions target him as the weak link in the bowling lineup, and by attacking him they would force Alastair Cook to summon his pacers. This propensity to be attacked by the batsmen is what brings Moeen his wickets, is another claim held against his bowling abilities. When India toured England in 2014, MS Dhoni admitted to having a plan to attack Moeen to put mileage on the England pacers in a long 5-Test series. That plan spectacularly backfired with Moeen taking 19 wickets and Dhoni’s men never really re-calibrated that option. When asked, Chris Rogers alluded to a similar plan of his team against Moeen as well and with the evidence of Michael Clarke and Steve Smith’s dismissals today, it doesn’t bode well for Australia if they are to stick with it.

However, that notion needs to be examined further. In these days, ball-by-ball information is only a few keystrokes away. Based on Cricinfo’s BBB commentary, I assembled information on the Moeen’s wickets so far. Of the 33 wickets, 18 came about when the batsmen was defending and only 15 when the batsman was trying to play an attacking stroke. The same metric for Swann in his first 40 wickets is: 22 (While Defending) and 18 (While attacking). Both spinners have claimed a high percentage their wickets through LBW, understandably so, as they both prefer bowling from around the wicket to right handers (Moeen 33%, Swann 45%). The higher share of LBWs for Swann underlies further his ability to stick to a line targeting the stumps.  The one metric in which Swann is streets ahead of Moeen is that 33 of his first 40 victims batted in the top 7, while only 17 of Moeen’s 33 were batsmen in the top 7 of the batting order.

Dobell had written the following while looking ahead to the Cardiff Test, and the English choices of Moeen and Adil Rashid as the spinner. “Despite the much-repeated myth that Moeen is a “part-time” bowler, it is not so. Since the start of the 2012 season, he has bowled more deliveries in first-class cricket than Rashid or even a county stalwart such as Gareth Batty. His bowling average in that time is also better than Rashid’s. Even this season, Moeen has bowled more overs in first-class cricket than Rashid and his record in Test cricket this year – 11 wickets in four Tests at an average of 41.63 – is not quite as grim as some might suggest.”

Based on Moeen’s returns in Tests so far, and his favorable comparison with Swann’s numbers at similar stage of his career, one might be led to believe that with more bowling under his belt, Moeen could go on to be England’s frontline spinner. It is the consistency (of Swann) that he lacks which can come by with more playing time, and further development of his spinning skills. Perhaps then, he could be a bowling allrounder. If he continues to bat the way he did today, with freedom and style that he so naturally possesses, he may even become a genuine Test allrounder some day!