As some of you might know, my “real” job is as an instructor, where I teach technicians and engineers to employ Non-Destructive Testing (NDT) methods such as ultrasonics to inspect and evaluate a wide range of structures like bridges, steel cables, storage tanks etc. In ultrasonics, and generally in Seismology, there is the detection (and application) of sound waves. One type of those waves is called the Compressional waves or Pressure waves (P-Waves). And so, when I went to take a leak in the bathrooms by the press box, I was surprised to see the word P-Wave on the toilet bowl deodorizer. I guess it’s a pun but for me, it took me back briefly to my day job and I shook myself out of it quickly to get back to cricket. (See, I can make puns too.) 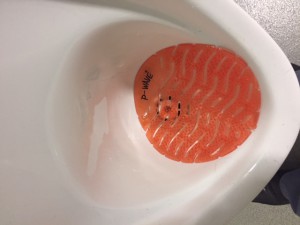 Today, I deduced that Ricky Ponting doesn’t wash his hands after peeing. At least not this one time. May be. Ponting is in the U.K. working for the broadcasters (SKY and Channel Nine) as well as for ESPN cricinfo. It so happened during the second session of the day that I went to the bathroom right after him. He was trying to open the door to leave and I was trying to push it open from the outside. After a brief few second stand-off of push and pull, I relented and Ponting emerged. A cursory nod and he was off.

I had a “Poppy is getting a little sloppy” moment from Seinfeld. You see, there are no paper towels in this bathroom to dry your hands after washing. It has one of those automatic, movement sensing dryers that sound like a jet plane taking off. When I was about to enter the bathroom, if he were drying his hands, I would have heard the monstrosity but I didn’t. He didn’t have a handkerchief either to dry his hands off. So, I am left with only one conclusion.

I’ll tell you who doesn’t use the automatic hand dryer but a handkerchief. The great Whispering Death, Mr. Michael Holding himself. After my little Sherlock Holmes/Seinfeld moment, I did my deed and was headed out and in walked Holding.

Anyway, I waited for him outside to thank him for being on Couch Talk in April. I didn’t hear the hand dryer but as I extended my hand to say hello to him, he said, “Just hold on a moment. Need to dry my hands”, and pulled out his handkerchief. I chatted with him for a few moments about the podcast, the world trip, and my current employers who were nice enough to let me continue with my Ashes plans. He laughed and walked away saying, “That must be a good company then! All good, man.” 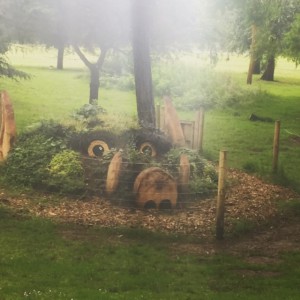 The walk from the ground back to my place takes me over the River Taff, and nice little part of Cardiff and also sort of wooded area with lots of trees and open green areas. One such area has this wooden boar sculpture buried in the ground. There are no signs around to indicate who made it or why it is there. It’s a bit creepy especially when you look at its ears from the side. I just assumed it’s one of those weird things and walked on home.

I’d mentioned in the previous diary about the funny looking Welsh signs. Here’s a sample of those. 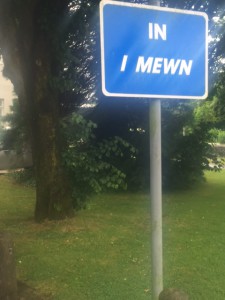 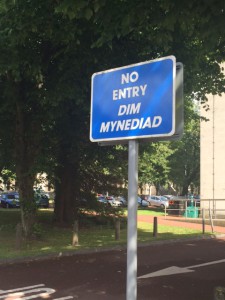 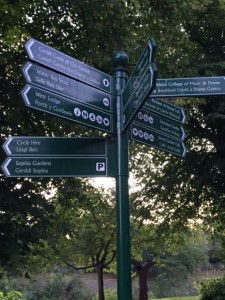