Finally, the games have begun. Twenty five days (possibly) of Test cricket. My first Ashes live action. From the press box to boot. Pretty psyched up.

As I had mentioned in an earlier diary piece, it’s a goosebumps inducing experience to be present in and around the stadium on Day 1 of the Test, and especially, the first Test of a series. I had set the alarm for 7 AM and was out the door by 7.45. It’s a leisurely 30 minute walk from my Airbnb place (1.3 miles according to Google Maps) to the SWALEC Stadium, and the walk includes a picturesque bridge crossing over River Taff that runs on the eastern side of the ground. I entertained myself reading the signs in Welsh, making random jokes in my head that would probably be funny only to me. 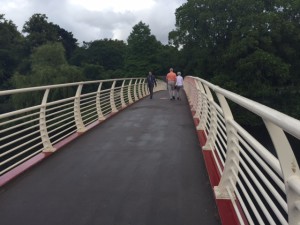 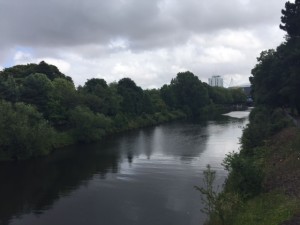 Crossing river Taff on way to the cricket ground

The pressbox was quite empty except for 3-4 journos and the ECB media folks. Every spot in the pressbox had a goodies bag. Based on my press box experiences, the sponsors or broadcasters of the series/tournaments provide this “gift” to all the journos. This one contained a portable USB charger, a thumb drive, a notebook, a pen (Parker no less), a small bottle of wine from Hardy’s, Yorkshire tea, some cookies, bag of crisps and popcorn. One of the most useful ones was from the bag I got in Bangladesh during World T20 last year, an universal power adapter. 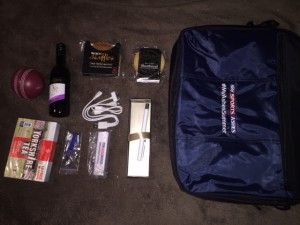 After setting up my computer in my spot, I went for a walk as the teams were warming up. Some school kids, about 50 of them, walked in for the cricket. Half of them were carrying England flags and the other half the flag of Wales. They were very close to the entry steps to the pavilion and the dressing rooms. This must be such a thrill for these kids to be able to see the players, for some, heroes, so up close and personal. 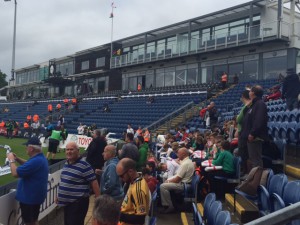 By 11 AM, the scheduled start time, the stadium was filled up to its 15,000 capacity. There was an interminable opening ceremony  where the flags of the three countries – Wales, Australia and England – were paraded out. There was a Welsh choir and a brass band. There were fireworks as well as the flamethrowers used during T20 matches to jazz up the scene. You had to do a double take to realize that all this being done by the ECB, the (self-appointed) guardians of ‘cricketing tradition’ in the world.

View of the Ashes opening ceremony from the press box

Before the opening ceremony shenanigans, there was a bit of drizzle around which delayed everything by 15-20 minutes. After what seemed like forever, the match started and everybody could just focus on the cricket. 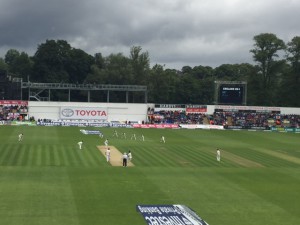 I’m covering the series for the Mumbai-based newspaper MiD DAY. Here’s the feature on Joe Root from Day 1 of the Test.