Posted on July 7, 2015 by thecricketcouch

When the idea of the world trip was first formed, a moment of inspiration from the Aussie couple Sharon and Patrick we met in Trinidad in April 2012, they also shared a neat piece of knowledge borne out of their time traveling the world: Use Airbnb to get places to stay at really affordable prices. I have been using a fair bit of Airbnb on cricket travels and in addition to cosy housing, it also has allowed us to cross paths with some interesting characters. There was a lady in Queensland who would talk to her miniature Pomeranian by holding it up to her face, and say, “Mate, you can’t do that mate”. It gave us an opportunity to stay with a Norwegian in Dublin, the only Norwegian I have met in my life. It even brought me to stay with someone who was kind of a distant relative of Curtley Ambrose in Antigua. One ‘born again Christians” family we stayed with in Sri Lanka even tried to convert us!

On this Ashes trip, I had sorted my staying arrangements in England with friends but needed to find a place in Cardiff for the first Test. To the airbnb machine I went and found the place, a month in advance. As I checked in to the place today after attending the pre-match captain press conferences, there was a cricket ball on the dressing table. The hosts had thought it would be a nice “Welcome home” gesture since I was here to cover the cricket. Right then, I knew I am going to have a terrific stay here. But the surprises kept on coming.

The couple that own the place are Mario Morris – a magician – and Lady Vee, sometimes part of his acts and others as balloon shape maker (I am not sure what the official title would be) as they are known in their profession. Soon after I checked in, Mario invited me to join them for dinner – chicken curry! No Airbnb host has ever offered me/us dinner (as they are not required to). I just couldn’t pass up the opportunity especially with the smell of Indian spices began wafting through the house. 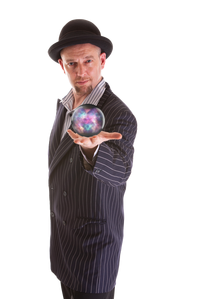 During the meal, Mario revealed that he has been a magician for 25 years and travels the world performing on the streets, and in theaters and every kind of venue in between. As soon he has said that, there was a tiny voice in my head that desperately wanted to ask him to perform a couple of tricks for me but I resisted. I didn’t want to be a douche, like the visiting relative that hears that you are participating in the annual school play and so wants you to act out a few lines.

But as the conversation between us got more interesting and there was a bit of a rapport, Mario volunteered himself to do a couple of tricks. My own personal performance with a seasoned magician! What a thrill! He got a deck of cards and as he offered the deck for me to pick a card, and just like that he slipped in to his performance mode. He was speaking as if he was in front of a large audience. He was joking, making observations, all the while his hands moving rapidly, drawing my eyes’ attention as he went about setting up the trick.

Unless your mind is disciplined and trained really well not to get distracted, it is impossible to keep track of all the things happening right before your eyes. And soon, without my knowing, Mario started pulling the card out of thin air, empty palms, from his billfold and so on. I knew my mind and eyes have been tricked by a professional and I couldn’t help but have sense of wonder about how easily he pulled it off.

He did another trick with a red handkerchief where it vanishes first, and he pulls it out of his mouth. We chatted for a while about how and when he got started, and how much he practices and the various key tricks he does, amongst other things. As an icing on the cake, he went back to the card trick, and pulled out the folded card from his mouth. I just applauded and said “Bravo!”. All the while Lady Vee was sitting at the table with a knowing smile. She has probably seen it all before.

What struck me the most about Mario was that he was combining several of the performing arts in to his work, that of a stand-up comedian, an actor, a showman and a magician. Each of those on their own is a difficult art to pull off in front of a group of people but to do it all together, especially with an audience that will be quick to judge and is in some ways wanting you to fail, is just incredible. I was like a kid, totally spellbound and awed by his legerdemain and showmanship, and I look forward to any more tricks he wants to show me, that is if he wishes to.