Posted on July 6, 2015 by thecricketcouch

It was a late start to the day. I woke up around 9.00 AM and all I had to do was pack my stuff up and head to Jarrod Kimber’s residence. He was driving to Cardiff for the first Ashes Test and he offered to give me a ride when I was looking for ways to get to Cardiff from London.

This is not the first time Jarrod has helped me. In fact, he was instrumental in me getting an opportunity to do podcasts for ESPNcricinfo, and has been the guest on the podcast with most number of return appearances and even before Cricinfo picked up Couch Talk, he had plugged it many times in his articles.

During the world trip that Kathleen and I were on, he was kind enough to invite us to his place in London a few times for barbeques so that we wouldn’t have to spend money on food! London can be and is a very expensive place. And when we were in Melbourne, we probably went to his parents’ place north of Melbourne a handful of times for food and drinks and he (and his family) has always been very kind to us. We can’t thank them enough.

I am actually staying at his apartment in Cardiff overnight before I could move to my own place that I had booked. All I had to do was shoot him an email saying I needed a place to crash one night and he welcomed it with open arms. So, Thanks Jarrod.

The ride to Cardiff from South East London was quite uneventful and it took about 3.5 hours. The place is actually on the south side of Cardiff right by the water. The one I am checking in to is closer to the city center and walking distance from the cricket ground. The Severn bridge connecting Wales to England is a beautiful piece of architecture. It is a mile-long suspension bridge connecting the two countries. 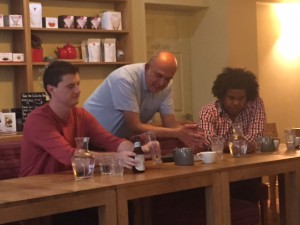 In the evening, I tagged along with Jarrod to an event at a local venue called the Waterloo Tea (in the Wyndham Arcade) where he and Dan Wilson of Daily Mirror were panelists talking about the issues concerning cricket today as well as the upcoming Ashes. There were about 30 people in audience and the topics discussed included cricket’s governance, the Big Three, Test cricket, the reducing cricket participation numbers in the U.K. and of course the Test series only 2 days away. It was organized by one Russell Holden who is the director of a Sports & Politics Consultancy firm. The discussion was stimulating with concerned questions and comments from the audience, and lasted about 90 minutes.

Afterwards, it was time for some dinner and drinks, and a late end to the day.