Posted on July 5, 2015 by thecricketcouch

The few times I have had press accreditation to cover cricket in the last few years, I have approached the opportunity as if it would be the last time I would get to be in such a privileged position. To have access to the cricket grounds and the various areas in and around them, and the opportunity to interview players and coaches is a privilege, and I don’t take it lightly. And so, whenever I have had the chance, I take full advantage of it and spend as much time in the cricket grounds – Cathedrals – as possible.

On match days, especially if its the first day of a Test match, I make every effort to get to the ground couple of hours before play starts. It gives me a chance to settle down in my spot, have a coffee and take a stroll around the stadium. As the crowd starts to filter in, the murmur builds up, and escalates to a level where you can actually reach out and touch the enthusiasm and the anticipation. This build up is a bit muted for limited over games unless it’s at a World cup. Then, there is no murmur or gradual build up of buzz, it is usually full on fervor especially if any of the sub-continental teams are featured.

After finally a good night’s rest (on Day 5 of this trip), I ventured out to South London to walk around The Oval cricket ground (KIA Oval, as someone corrected me on Twitter). It was early afternoon, the sun was gently warm, the humidity was low and made for a picture perfect day for a nice, easy stroll.

It took about 20 minutes at my leisurely pace to complete one trip around the Oval, including the various times I stopped to take pictures. Since the Alec Stewart Gate is the closest to the Vauxhall station, that’s where I began walking clock-wise around the stadium. I have been inside the oval a few times, once for a Surrey T20 match and the others during last year’s India v England Test match. I haven’t had an opportunity to see this ground without tens of thousands of people in and around it, and so, today without any cricket there, it was just me and the stadium. But that also meant I couldn’t be inside the ground but hey, you can’t have everything! 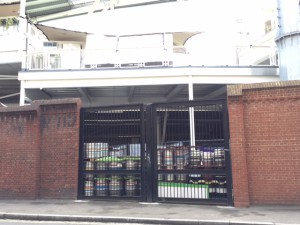 The first thing that caught my eye was the stacks of beer kegs lined up against the gates. It is just incredible the amount of booze that gets consumed at any cricket match in England. I guess Australia is not that far behind, but considering how much more expensive the beers are in London, it just boggles the mind. It is a surprise nothing untoward has happened with so many drunk patrons in the stands, except for the odd streaker. Gary Naylor (of the wonderful 99.94 blog), whom I met later in the day mentioned about an incident that happened a few weeks ago at a T20 match at the Oval. A bunch of over-inebriated fans apparently hurled their empty beer cups at the stewards who were stationed by the boundary to prevent pitch invaders. That’s just plain wrong and despicable.

As I walked further towards the Vauxhall End, the familiar sight of the Oval Gasholders came in to view. It is an unwritten rule that any broadcast from the Oval will have to include a shot of the Oval Gasholders, and I have never seen these gasholders on their own; it’s always a shot of them with the Oval in the foreground. So I decided to get as close to the structure as possible to get pictures without the cricket ground in the frame. (To learn more about these gasholders: Wikipedia Entry). 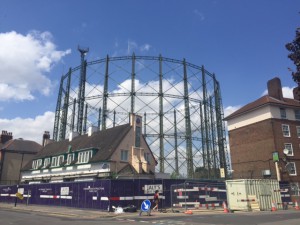 Gasholder Glory, without the Oval 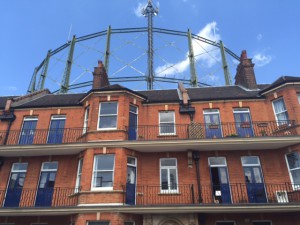 As I walked further, I came upon the main entrance to the Oval. The flowers and the creepers adorning the pavilion give the building such a terrific historic feel. You can tell the caretakers of this place put a lot in to its maintenance, upkeep and appearance. A stadium holds a special appeal, at least to me; it’s place for thousands upon thousands of people to congregate in an undeclared common promise to support an endeavor like sport which aspires to something higher and in turn, encouraging all of us to be better than our own selves.

So next time you want to watch a cricket match, do yourself a favor and reach the ground hours before play and try to explore it as much as you can. Wherever there are guided tours available, take them. The sport is richer when its supporters know about its past and the places of its pursuit.