Posted on July 4, 2015 by thecricketcouch

During our world trip, we took roughly 25 different flights between and within countries. My favorite past time was to try and spot as many cricket fields as possible from the air, as the flight makes the descent towards the destination’s airport. The best country, in my experience, for this activity was Australia. The usually cloudless skies, the lack of pollution and neatly built suburbs allowed to sight the cricket fields from great heights. Since it was a trip geared around cricket, it always provided me a great kick whenever I spotted more than 5 fields from my seat while approaching the airport.

Of the cities, Melbourne, with its inclination for all sports, had the most number of cricket fields I could spot. The sight of a open green space with thin brown lines in the middle, seen from 35000 feet is something I cherished very much.

It was quite tough to do this in the Indian subcontinent. Some of the flight landings were past sunset or early in the morning; even if there were fields, they were smaller or were crowded out by buildings and structures around it; And of course, pollution and clouds made it hard as well.

While on the flight from Chicago a few days ago, as the flight started to make its descent towards Heathrow, I settled in to field spotting mode, and ready with my camera phone. Outside London, there were plenty of farmlands and further in, there were the odd cricket field but there were a lot more of Golf courses. But as the London Eye came in to view at a distance and the flight was sufficiently well below the low hanging clouds, there were lot more cricket fields – sometimes 2-3 together – that could be spotted. I felt the same kind of joy as I did while doing this exercise on the world trip. Happy.

On flights within the U.S., I do the same but for Baseball fields. In fact, one of my vivid memories from the first time I flew in to U.S (Chicago) from India was the various baseball and football fields I could see from the sky. Another thing to spot from the airplane is the number of swimming pools which gives an idea of the level of poshness of the areas.

So next time you are on a flight, try this out and see how many cricket fields (or any other thing of interest) you can pick out. 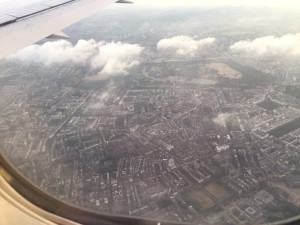 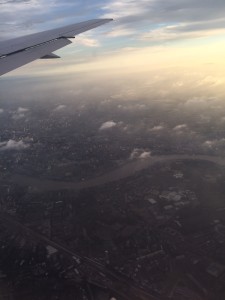 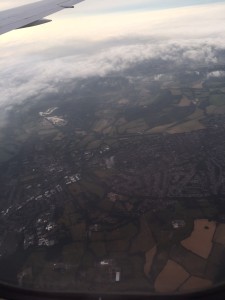 As I mentioned in Day 3 Diary, I was going to take a call on going back to Chelmsford when I woke up. I decided not to go, and would you believe it, Ryan Harris, one of my favorite cricketers of this decade, chose to call it a day. And the Aussies romped home over Essex with Hazlewood and Starc taking 7 wickets between them.

Talking of Ryan Harris, when I was walking around the ground during Day 3, I remember seeing members of Australian support staff (including Alex Kountouris, the team physio) and Harris huddled together near the player entrance during the 2nd session having some serious discussions. At that time, I didn’t think too much of it and paused only for a brief moment. On hindsight, perhaps it was then they had realized and made the decision that Harris wouldn’t have any part to play in the Ashes, which led to him calling it a day.

Moral of the story: 1) Don’t skip out on a day of cricket and 2) If something looks fishy, snoop around some more.