Posted on July 3, 2015 by thecricketcouch

For the first piece of cricketing action on this trip, I went on a 2 hour commute (1 bus ride, 2 regional trains and 2 tube rides) to get to Chelmsford from New Malden. Some people I met there didn’t agree with my assessment that Chelmsford (and Essex) cannot be thought of as an extension of London, or to even be considered as in the outskirts of London if takes 2 hours to get there. Those people might also think Anna Nagar is part of Chennai (Sorry to break the news to you, Siva).

The train ride was along some farmlands and having read about Alistair Cook being such a home body that loves hanging out at his farm, I fully expected a giant portrait of Cook in overalls wrangling sheep welcoming the visitors to Chelmsford. Instead it was the England captain in an Essex shirt doing the welcoming.

I was about half hour late trying to figure out the way to the ground and the gate from which I was supposed to pick my accreditation from. ECB accreditation department have been very professional and thoroughly helpful in arranging it all. They had sent my press pass to Essex so that I didn’t have to make a trip to Lord’s for it. When I reached the gate, the person there said, “Oh you must be Subash… here’s your pass.” Considering the only other person in the ground with an Indian sounding name was captaining Essex against the visiting Aussies, the odds were firmly on her side.

It was good to see some familiar faces in the press box, from the time at the world cup and after some hi’s and hello’s, I settled in to the seat with my name marked on it. The Essex press box is quite small – seats about 12 people – and so they had set up extra media seats in the stands just outside. Generally the outdoor seating is good in England but lately, there has been a heat spike and the hot sun made it uncomfortable to be there and so I decided to wander around.

It was interesting to see the ground pretty full – the price of tickets could be one reason (£10 for adults and £5 for juniors). The crowd was appreciative of their local boys’ efforts getting past 400 after Australia posted well in excess of 550. They even were generous with their applause for the Aussies, that is, except for Shane Watson. It’s a bizarre thing, this deep seated dislike of Watson. Even the Aussie fans here couldn’t care much for him.

Even though I was late for the start of play, I was in for enough time to see Mitchell Starc to rediscover his deadly bowling form. The Essex lower order was no match to his accurate yorkers, delivered from both sides of the wicket. One fella sitting next to me apparently plays club games against some of the Essex players and he was pessimistic that Essex would avoid follow on with the target only a dozen runs away, with 4 wickets in hand. The home team just barely squeaked past it!

Watching Starc operate at top speed, making the ball dip late, and knowing he will have the able support of Josh Hazlewood, Mitchell Johnson (and Siddle and Harris, if and when needed), it is hard to look past the Aussies winning the Ashes in England for the first time since 2001.  The batsmen knew what was coming when Starc switched to bowling around the wicket and yet they couldn’t do anything about it. 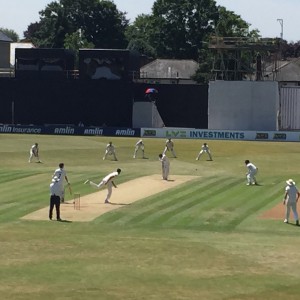 Starc with a yorker to claim one of his 6 wickets.

I spent most of the last 2 sessions of the day sitting in a shaded section with Cricinfo’s Superwomanvideographer Mel Farrell talking about the Ashes, the possible starting XI of the Aussies, and her move to UK etc. The game became interesting as the pitch became a bit two-paced and the Aussies were eight down at close of play (Watson’s dismissal – LBW to a full toss brought out a lot more cheer from the crowd than the other wickets, just so you know). With Australia leading by 300+ and tomorrow being the final day of the match, there is every possibility that there could be result (other than draw).

As I am writing this, I am not really keen on making the 2 hour commute back to Anna Nagar, but let me sleep on it.